A regular at STA monthly meetings, it was a delight to see Rajan Dhall again at this first in-person STA monthly meeting of 2022 at One Moorgate Place. Looking dapper, confident and slick in head-to-toe black, his presentation was as polished as he was, yet he managed to encourage audience participation throughout. 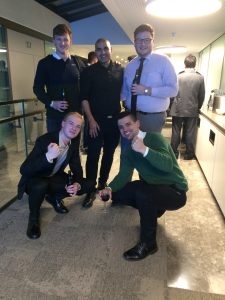 The talk was titled: ‘Common misconceptions with technical analysis and predicting movements in the financial markets’ and he admitted that while he writes on Macro themes which include a bit of fundamentals, 75% of his analysis is price-based. The ‘F’ word, as STA Chairman Eddie Tofpik calls it, drew his usual disapproval – and appeared again when some in the audience also admitted to veering away from strict technical analysis.

Like Lee Sandford who founded Trading College, Raj has a sporting background having worked on a sports trading desk calculating probabilities. As he says: ‘’when working with odds it’s stupid not to place a bet’’ when out-of the money options are very good value. 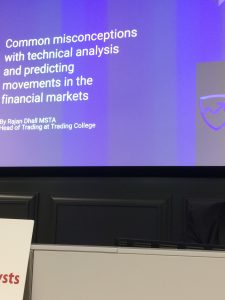 Our speaker firmly believes that without systematic trading there is way too much ambiguity in discretionary trading – and with this in mind he’s made thousands of trading systems. From his current examples (Glencore share price and a few others) he’s using three moving averages (including a 200 period one), a MACD histogram, and an oscillator his chart system calls OBS, which I’m guessing stands for overbought/oversold (as per Martin J. Pring) and which I would call the Relative Strength Index (RSI) – and Raj says he doesn’t really like. So, not to worry.

He then went into considerable detail about the psychology of a trader, its ups and downs, and the importance of being patient. ‘’Overtrading is a big killer’’, he stresses while encouraging us to ‘’let your system run to its entirety [as otherwise] you’re never going to know if your system works.’’