Tom Hicks and Robert Carver’s ‘fireside chat’: In June and no fireplace

The two have a lot in common, as do I, who also switched between banking and a commodity broker who ran one of the first hedge funds – with a stint of proprietary trading along the way.  However, unlike Robert, I wasn’t a self-confessed computer geek, didn’t go to two universities, or study economics.

He started as an intern at Man AHL, a firm founded in 1987 to provide diversified quantitative investment management.  It offers absolute return and long-only funds, with both momentum and non-momentum strategies.  This, and through the use of derivatives, taught him how to build, back-test, and apply some macro economic ideas to his trading systems.  He obviously knows what he’s doing, his markets, and has a strong intuitive understanding of risk/reward.

Retiring from the industry in 2013, he’s subsequently concentrated on trading his own portfolio of futures contracts (no more than 37 instruments) which are liquid, representative of assets in the ‘universe of things’, allowing the maximum diversification relative to capital.  Though collecting hourly data, he checks his charts once a day because “babysitting a computer system is not my idea of fun”.

He’s keen on moving averages, using up to 6 pairs, espeically weighted ones, because they reduce the impact of losses; to this he adds the concept of breakout and mean reversion.  A serious fan of lots of price points – because ‘statistical significance needs an awful lot of data’ – like 30 years he believes that in the scheme of things poor performance over the last 2 or 3 years is a small set.  He says he hasn’t changed his simple, robust system in 5 years.

Tips from the top: He doesn’t use stops but new traders should, calibrating them so that they align with the opening position.  Measure your P+L as a percentage, not as a monetary value.  Don’t over analyse.  Never use all your margin money.  Trade December futures contracts only to avoid seasonality. 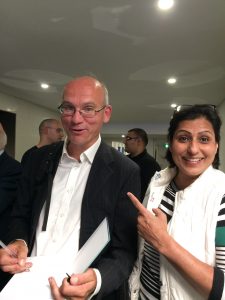 Give more weight to live trading performance than on back-teting.  “Walk before you run”.

His book, ‘Systematic Trading: A unique new method for designing trading and investing systems’ is published by Harriman House and is available at the usual places.   STA member Bublee Goswami (AKA @ForexProDiva) had brought her copy along and he kindly signed it for her.

A parting shot from one of our younger members: “Nice talk, shame about the charts” – scrawled on a tablet.