Introduced by Guido Riolo, Bloomberg’s Head of Charting, as ‘a genius of the world of finance’ whose Sequential®, Combo®, and TD Lines® the terminal supplies, audience expectations were running high at the STA’s monthly meeting. A heavyweight in the world of technical analysis, with 44 years’ work under his belt, he and his posse arrived from the US this week.

With an elephantine memory of stock market moves (he started following the markets in 1971 going full time at America’s National Investment Services in 1972) he took us through a series of old – perhaps too old for some – examples of his market calls. Having worked with the Bunker-Hunt brothers as they cornered the silver market in the early 1980’s and who then ignored his recommendation to sell out, when reiterating his call as the price plummeted they asked, ‘sell to whom?’ A lesson to us all that in bull markets one must prepare to sell into strength, and in bear ones remember that they end when the last bear has sold. 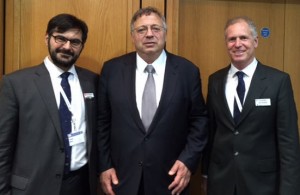 He insists, ‘I am not a pure technician in the conventional sense’ as ‘everything we have developed is anticipatory’; his focus is market timing, adding my ‘whole background is institutions – not mental though’ as his wife often reminds him! Focusing on the difference between daily opening prices from the previous close, rather than close to close, pessimism grows if they gap lower or if they ‘foot downside’ (close lower). He then compares this with the previous four closes and if the most recent close is ‘flip downside’ (below the last four) it suggests a change in tone, if not trend.

Interestingly he claims his personality changed in February 2016 and that he is finding the US stock markets extremely tricky. Due in part to ‘the authorities who have disrupted the natural rhythm of markets’ nevertheless he has not adjusted his models because ‘trends can be delayed but ultimately will win out’. Claiming he hasn’t slept in days, exacerbated by a long plane flight on Monday, he had a couple of senior moments and was ably rescued by his two protégés.

The presentation has been recorded and will be available shortly to members only on www.technicalanalysts.com