Peaks and tops: Markets and trends

As technical analysts we are all too aware of the sort of chart patterns we should look for at market tops.  Double and triple tops, quadruple ones even, the ubiquitous head and shoulders, islands, shooting or evening stars and hanging men.  But to what extent does familiarity and the labels themselves cause entrenched mind-sets and expectations?

What of rare and difficult formations seen only occasionally at peaks?  Personally among these I would include broadening tops and diamonds, a recent example of which you can see at the bottom of this piece.  Not only is it badly drawn but open to discussion as to where exactly one should start and end the lines.  Which in turn leads to discussions as to when and whether it is complete.

I also add another chart of a potential top, one which has no name (as far as I know).  ‘Swiss chalet’ perhaps?  Without a tag, would you have looked for it?  So language, as you can see, does influence and even determine thoughts and methods.

In the wider world you will often hear and read about ‘peaks’.  Though usually not linked to finance, the idea is the same: a trend, or something that has reached the apex of its usefulness.  Also associated with indulgence and excess, like the ‘floral artist’ at an Abu Dhabi wedding whose 376 underlings worked night and day for a week preparing for the three hour event.

Britain, according to Mintel, has reached ‘peak crisps’.  Our lunchbox favourite is suffering from deflation as sales fell to £1.34 billion in 2015, outsold for the first time by other snacks.  Peak pessimism is a chartist’s old favourite, when negative sentiment is so overwhelming that a contrarian view is just so compelling.  Millennials’ ‘peak whine’ is another one with negative connotations.

The ‘peak-end’ rule, a principal from psychology which describes how we all perceive and remember experiences. It states that a person will remember and gauge any experience by the “peak” of the experience, and the end.

‘Peak oil’ has quite a different meaning because it deems that a finite supply of hydrocarbons will always pull prices upwards; perhaps what chartists might call a secular trend.  At today’s prices many will be querying the wisdom of this idea.

Finally the last word probably has to go to Steve Howard, IKEA’s head of sustainability.  ‘If we look on a global basis, in the West we have probably hit peak stuff.  I’d say we’ve hit peak red meat, sugar, home furnishings…(and the new state of affairs could be called) peak curtains’. 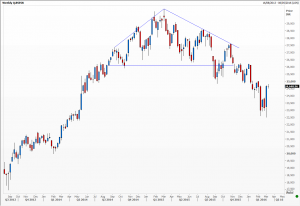