Starting a few minutes late, up at the front of the conference hall at One Moorgate Place, London EC2 R 6EA, was new STA Chairman Tom Hicks who had previous incumbent Axel Rudolph’s big shoes to fill. He was flanked by Committee members Clive Lambert and Richard Adcock, plus Claudia Shaffer taking the minutes. All-round organisational whiz Katie Abberton was there to check memberships, give out red voting cards to those entitled to do so, count the votes ‘for’ – and as usual, there were none against the motions. 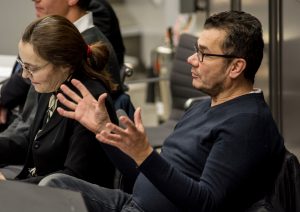 Determined to get through his ‘to do’ list as quickly as possible (so that we could move on to the fun stuff of the evening which was drinks, lovely canapes and enjoyable conversations), it was almost 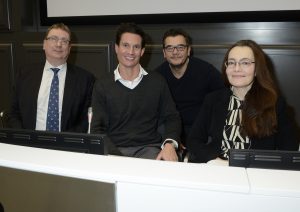 as if Tom had rehearsed and choreographed it all beforehand. It also helped that the turnout wasn’t as big as it can be, with just 5 fellows and 21 members – plus a scattering of associate members in the audience.

First, he thanked Axel for his 6 years as Chairman, stated that he plans to move on with memorandums of understanding with other societies like the tie-up with ACI and January 2020’s debate organised in conjunction with CISI. He wants to make the STA and its Committees more interactive, connecting more closely with our 1473 members.

There appears to be quite a few changes at the top, Jeff Boccaccio, Patricia Elbaz, and Daniel Wynne elected as Directors and Karen Jones re-joining as one. Last year’s accounts were approved, and though in 2019 there was a deficit of just over £5,000, they expect a surplus next year. The Investment Committee confirmed these had produced a return of over £10,000 based on a very conservative ‘’safety first’’ policy.

As there were no questions from the audience, the meeting was promptly closed. Then followed much excited, happy chatter between new, old and very old members. Such fun!