Secrets of the Charts: As revealed by Shares magazine

A colleague last week brought to my attention an article in the latest issue of Shares magazine and asked what I had thought of it. Not only 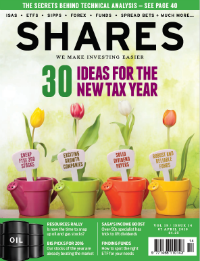 did I have to admit that I hadn’t seen it – ‘yet’ I added cautiously – but the reality was I hadn’t even heard of this UK weekly. Popping into my local coffee bar by Borough Market a little later, where the owner is a keen follower of finance, he produced that very same issue saying the editor (also a customer) had given it to him. Obviously I had to read the article (in the issue with tulips in pots on the cover).

We are not promoting anything; rather the point here is to emphasise how technical analysis has become mainstream, a valuable tool in the armoury of all those dealing with money and investments. And if you haven’t done so already, perhaps its time to start learning, preferably on the STA’s Diploma Course at the London School of Economics. Or if you are already a veteran, then maybe you would benefit from the monthly lectures (plus networking drinks) the STA holds at the British Bankers Association in The City.

Introduced by deputy editor Tom Sieber who states ‘that many people would like to know more about core charting techniques’ he adds a cute Warren Buffet quote: ‘if past history was all there was to the game, the richest people would be librarians’.

The bulk of the six page feature is written by a veteran with 20 years experience covering the markets, most recently as chief market strategist for IG Group (spread betting firm) and now a presenter at BBC Radio 5 Live. Leading with: ‘My name is David Jones and I am a technical analyst. It sounds like the start of an Alcoholics Anonymous meeting, and although it is a tenuous link, I do think for some people charting is an addiction or something akin to a cult’. He, like star fund manager Anthony Bolton stresses, ‘the biggest benefit of charting is its usefulness in helping you to avoid bad investments and trades and also letting you know that your view is probably wrong’. He goes on to cover a clutch of classic chart patterns and ideas.