Murray’s minted performance: In tune with our summer party mood

Murray Gunn, currently with Elliott Wave International and previously head of technical analysis at HSBC, told us his talk would last between 30 and 45 minutes. Timed to perfection, he wound up his presentation after 37 minutes commenting on the outlook for the Fine Wine index – which obviously segued neatly on to our drinks reception. This time in the beautiful domed, chandeliered, and frescoed grand hall – quite the fairy tale setting.

Genuinely pleased to have been invited back to speak at the STA – which just turned 50 years old as he had too – he claims turning 55 is the more important landmark because it’s a Fibonacci number. A cause close to his heart, the talk was focused on Elliott Waves, a subject revived by Robert Prechter in the early 1980s, and Socionomics to which the latter turned his hand in the 2000s. 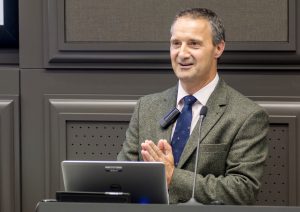 Quick-stepping through the briefest of histories of technical analysis, with a sly dig at the ‘funnymentalist’ community, he told us that the wonks at the OECD use price action of the stock market as one of their leading indicators because it leads the economy. He, like Prechter, believes that “social mood influences the character of social events” which in turn influences social actions and the way we react to financial conditions. In other words, they turn causality upside down.

His slides are clear and clever, indeed slick; his delivery likewise. Top of the bunch was the video of pop songs through the ages and how the lyrics and tunes reflect social mood. He is not alone as the Bank of England’s chief economist Andy Haldane agrees that Spotify downloads and their semantics reflect upbeat versus negative trends. Murray admitted that when choosing the tunes reflecting the most recent styles, like drill, dubstep and emo, he enlisted his 13-year-old daughter to come up with suggestions. Brilliant teamwork while keeping it in the family.

This is probably the best STA video you are likely to have seen. Make an appointment to watch!