Rocking up in time – appropriately on the 4th of July – at the Prince Albert pub by Battersea Park, ready to perform my cloakroom attendant duties, Mark Tennyson d’Eyncourt and Rajan Dhall had already nab 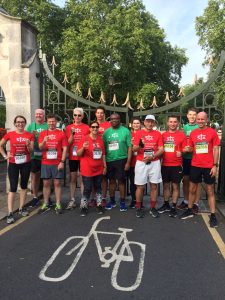 bed the best table in the garden; a good start. Runners trickled in at a steady pace, and were supplied with red and green T-shirts with the STA logo, and a candle to match. On completion of the 5.6 kilometre run, these could be exchanged for a free drink. 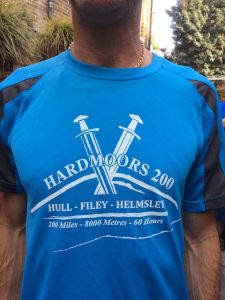 Milling around ahead of the 18:45 start, I took it upon myself to quiz familiar and new faces as to why they had decided to participate. My first victim, Martin Sewell, passed the Diploma exam in April 1999 having studied technical analysis on our course at Southbank University; he also has a PhD. In applied finance and has recently landed a new job in machine learning. He rarely makes it to monthly meetings but, as a keen runner, and because his sister had died of cancer (once again this year the STA ran to raise money for Cancer Research UK), the fun run was just what he needed. Lucky the others hadn’t spotted his T-shirt which proved he had already completed a 200 mile run.

My next victim, who was asked for his ‘name and number’, was familiar face David Kerly who, when asked if he ran regularly replied, ‘’Oh no, no, nah! Never done running but did do cycling.’’ Thorough as one would expect from someone who has his own technical analysis firm, www.worldofcharts.co.uk he had put in 12 practice runs in June, training for this event.

Dee O’Hare, a member for 25 years or so, had been to the STA poker night and enjoyed it. When heard about the run (via the STA’s newsletter, which he enjoys) he thought the idea ‘ace’, especially as the STA was sponsoring the runners. Modestly he added, ‘’I’ve done a few runs before but I don’t like to talk about it.”

Marcus Webster, a member since 2015 finds it difficult to come to our monthly meetings as he’s usually looking after his kids. However, as a regular runner he came to Battersea again because “I did it last year and I had a good time.”

STA regular and distinguished university lecturer Patricia Elbaz came to walk, not run, the course. “Supporting charity is so important. Whether Parkinson’s, Alzheimer’s or cancer, these are so topical. I love the opportunity to support something. Once a month I do voluntary work because it’s nice not to focus on yourself.” So, not only collegiate and game, the girl ‘does good’. Excellent! 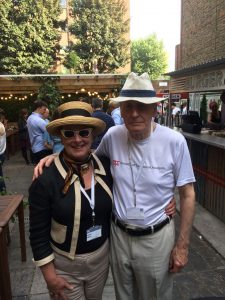