Trending over the very long term – Secular trends and ruminations

Trading the wholesale markets for the last 35 years, I have been thinking about the changes I have seen.

Most obvious of course is technology, the advent of computing power revolutionising the way we technical analysts work, the quantity of data we can deal with, and the choices we have available to us. Not forgetting search engines so that we can quickly double-check details we have forgotten and theories we are a bit flaky on. I find Wikipedia and StockCharts.com invaluable when unsure of which parameter is the default for a particular analysis – and so on.
Digging through the depths of my filing cupboard I found some really old charts and things – like rulers and pencils, pen and paper, and a calculator. The one I bought when starting university which, because it had two memories plus a square root function, cost the equivalent of one hundred packets of cigarettes. Relative values change, don’t they. 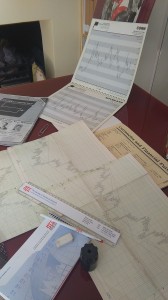 What I also realise, reinforced by an interview in City AM Money Magazine launched this week (newspaper highly recommended, by the way) is that the people, and the way of doing business in the City of London have really, really changed.

An interview with Sue Round who has worked at Ecclesiastical Investments (founded in 1887) since 1984 confirmed my thoughts. She started as the office dogsbody but soon progressed, with in-house training, as did I.
One learnt the business from the bottom up, and became highly specialised in one’s area. Say a stockbroker who only worked with gold mining stocks, known as Kaffir shares. One would draw the charts by hand – which was possible as one only looked at a handful of companies, or even only one instrument in the case of spot dollar/mark dealers – and one could see and know who one’s counterparties were, as well as knowing what the clients were doing.
Today, automated trading, dark pools, armchair traders, and regulators have shifted the playing field. But secular trends still endure, like the trend to lower global interest rates. (See the chart of benchmark US 10-year Treasury Note yields). Who would have thought that the Italian government could borrow at negative interest rates (today -0.01%) on three-month Treasury Bills? 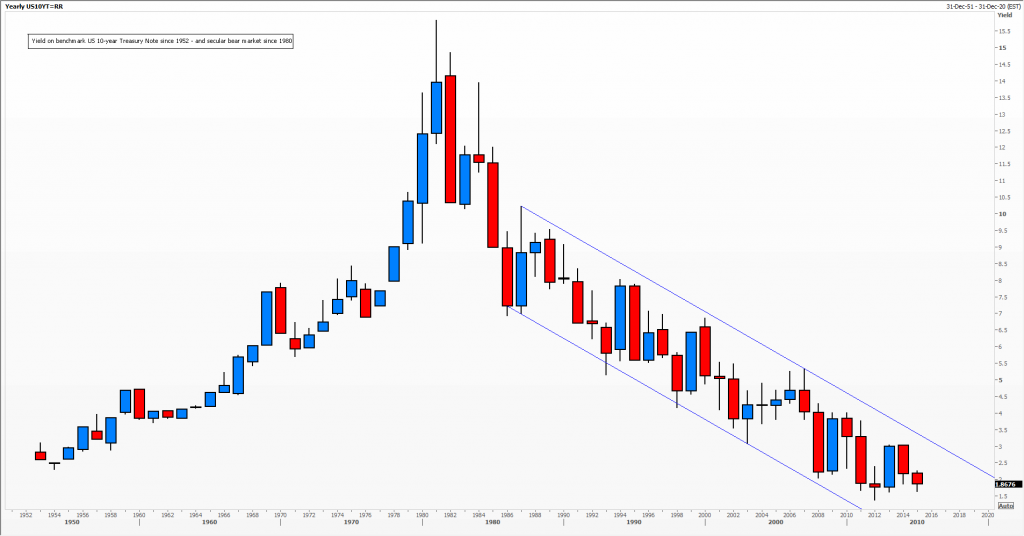