‘The Man who Solved the Market: How Jim Simons Launched the Quant Revolution’: A book review by Robin Wrigglesworth

On reading the Weekend FT last Saturday, I stumbled on a piece entitled ‘Algorithm for our times’ about a man I’d never heard of. It’s the American in the photo, taken in 2011, who looks like a grizzled and possibly grumpy old man (says this grumpy old bag). It’s no wonder I, and no doubt many others, are unfamiliar with his name and face as he shunned publicity. In a rare 2006 interview he says, quoting Orwell’s donkey in ‘Animal Farm’: ‘’God gave me a tail to keep off the flies. But I’d rather have had no tail and no flies’’.
The book’s author, Gregory Zuckerman, estimates that by harnessing computer science and big data sets. Simons created a firm, Renaissance Technologies, so successful he estimates it has 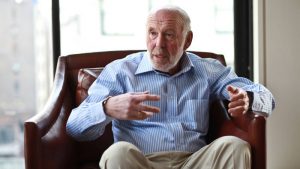 generated over $100 billion in trading profits since 1988. He adds that when the fund made its first $1 million in a day, Simons cracked open the champagne. The author adds wryly: the gains ‘became so frequent that the drinking got a bit out of hand’.

Ironically, he started in the potato market (as I did via the Baltic Exchange) – the regulators came a-calling as they thought he was trying to corner it. He then went on to lose his shirt trading the bond markets, admitting: ‘’Sometimes I look at this and feel I’m just some guy who doesn’t really know what he’s doing’’. He also admits that his one, simple rule of thumb is, ‘’remove all emotion’’. Zuckerman, on the other hand, believes that Simons real talent ‘was not inventing complex trading models and algorithms himself. His talent was to spot, nurture and harness beautiful but often combustible minds’.

I’m planning to buy the book which, incidentally, has been shortlisted for the FT and McKinsey business book of the year award 2019, because I think my style of technical analysis might benefit from the rigour with which this liberal mathematician approached the markets. As CNBC news states: ‘Renaissance Technologies uses quantative models underpinned by massive amounts of data to identify and profit from patterns in the market’. Right up a technical analyst’s street!

I hope you’ll be able to open this link. 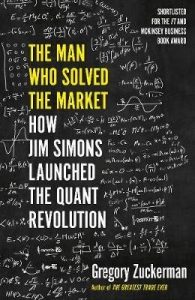