Front row seats for veteran technical analysts, Trevor Neil and myself, at this eagerly awaited presentation.

WD Gann expert Tony kicked off saying that the US economy has a 36-year cycle. I don’t know what cycle our speaker’s body clock is working on, but both of us agreed it certainly looks good. A seriously slick, clear, up-tempo presentation, timed to perfection, underline just what a pro we have at the society.

He explained that Gann’s ideas, set out in 1927’s ‘The Tunnel Thru the Air’ and then 1950’s ‘The Magic Word’ (ahead of his death in 1955), were, at the time, religiously and socially unacceptable. Therefore much of the writing, pages, size and layout have hidden in them the Golden Mean and the 50 per cent proportion – which he called the law of octaves (the 7 musical notes). He warns that, ‘’markets are not easy, and this [Gann] is no exception to that’’.

Today, society members are totally au fait with Fibonacci ratios, but not so then. The half-way point is important because if the 50 per cent correction level breaks, then it means that the system is changing. The long term phases of Gann’s cycle have specific wave patterns associated with them, and can be divided into sections.

The first half of a secular move is seen as a change in the external structure, the masculine half of the move. What follows later is known as the internal process, and is the feminine half. Within this are 3 equal-sized patterns relating to momentum. Starting with the transition cycle, which eliminates redundant beliefs, we move to a more dynamic transformation cycle which lays down new infrastructure and ends with excesses – but NOT a crash. The final third, known as the termination cycle, is speculative rather than innovative and akin to Elliott’s Wave 5.

He goes on to make predictions for various major markets and economic measures, stressing that current disinflation, which is expected to last until 2019 or 2020, will then cause economic trauma roughly in 2022 and uncontrollable inflation after 2023. 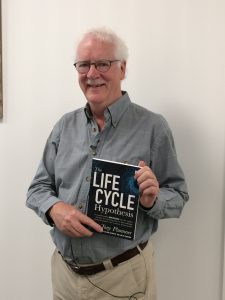 This is a talk where the video, available to members on the STA website, really comes into its own. Watch, pause and re-run the bits you didn’t quite catch or to look at the many interesting historical charts he shared with us. Alternatively, buy his book!