STA members and the Committee are always a font of knowledge. Now that they know I’m always on the lookout for ‘content’ – as it’s known in the trade – they give me leads for further enquiry, newspaper clippings, photos which might come in handy and historical charts. These I use in various social media platforms and on our website www.technicalanalysts.com 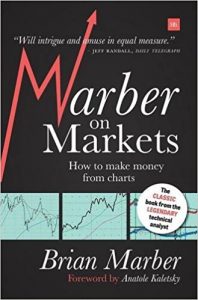 In this way, the obituary of legendary technical analyst Brian Marber, who dies on the 9th June, came my way. Published on the 28th of June in The Daily Telegraph, Brian Stewart Marber was born on the 5th March 1934 in Cricklewood to Jewish parents whose families had emigrated from Poland and Russia via Antwerp. His Dad insisted he read economics, not French, at St John’s College, Cambridge where he immediately joined the brilliant Footlights am-dram club. His love of comedy and all things theatrical remained with him throughout his long and varied career.

His first steps to charting were inspired by a talk from an American technical analyst in 1966, from where he went on to become one of the most respected and widely followed share and currency forecasters of his time. I certainly remember that, when I started in the City in 1982, his FX forecasts (Reuters page GURU) were essential Monday morning reading for all currency traders – chart enthusiasts or otherwise. Marber’s popularity certainly smoothed my way into being accepted by a bunch of hard bitten old hands in the dealing room.

Through stints at various stockbrokers, investment houses and media companies, his reports were as witty as his repartee, and often timed major market turns to perfection. He once said, ‘’as a chartist it helps not to be too well informed. Too great a knowledge of the fundamentals can only distract the chartist from the message of his charts’’. Another well-used phrase of his was: ‘People’ and ‘think’ are what matter; to forecast, all you need to know are what people are thinking. His time at Bloomberg didn’t go so well. His first assignment was to write a piece on the effect that a total eclipse would have on the markets that day; his copy: ‘It’s been so dark, I can’t see a thing’. It was his last day there.

His book, ‘Marber on Markets’ was published in 2007 and is one of the most highly rated among the titles chosen by the STA Committee in our Book Club feature for Market Technician issue 84 – March 2018. He is survived by two sons, Patrick and Andrew, from his second wife Angela Benjamin. All who knew him will miss him because, in his own words: ‘’To be my friend all you have to do is laugh at my jokes – and dislike the people I dislike’’.