Yesterday something completely different happened at the regular STA monthly meeting: a talk without charts! Well, just one but none of us managed to guess what it was: blood sugar levels of an Israeli parole board, so not an entirely surprising result.
Steve is a well-known and well respected motivational coach with an emphasis on trading psychology. Starting off with team building exercises for the military, sports groups, and poker players, in March 2005 he found himself in a trading room as key US non-farm payroll data was released. He recognised the gladiator style ‘hedge fund chic’ in an arena atmosphere – and has been focusing on financial markets ever since (2006). 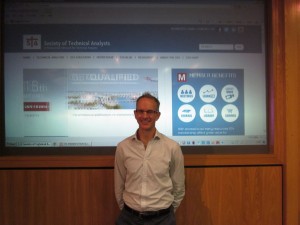 The four areas in which performance can be improved are the ‘four S’s’ – Skills (knowledge), Strategy (game plan), State (keeping up with market psychology), and Situation (not physical location but geopolitical issues and key market variables). With all of these the aim is to keep as close to ‘best practice’ as possible to avoid drifting and losing focus. To do this one has to learn to deal with stress and build resiliency. Breathing techniques, very much based on yoga meditation practice, form the basis of this training.
He also explained how the heart is the key body motor and how it pumps blood to where it’s needed most. This explains why we often can’t think clearly when we are stressed because the blood has been drained from the cortex of the brain to its stem in order to deal with a ‘fight or flight’ situation. However, he notes that when developing trading algorithms (usually to cut out emotions) one loses something; this is because emotions actually speed up limbic thinking and encourage an awareness of danger. Therefore one should notice, label, and tame these feelings.

Mindfulness – such a buzzword these days – is a way to train our attention so that we are aware of and notice what is going on around us. Developed by the US military to help making decisions under stress and conditions of uncertainty, it helps one see the bigger picture. To improve here one needs Focused Attention Training (acronym FAT) which leads to the 7 P’s: Proper Planning and Preparation Prevents Piss Poor Performance. Nice!