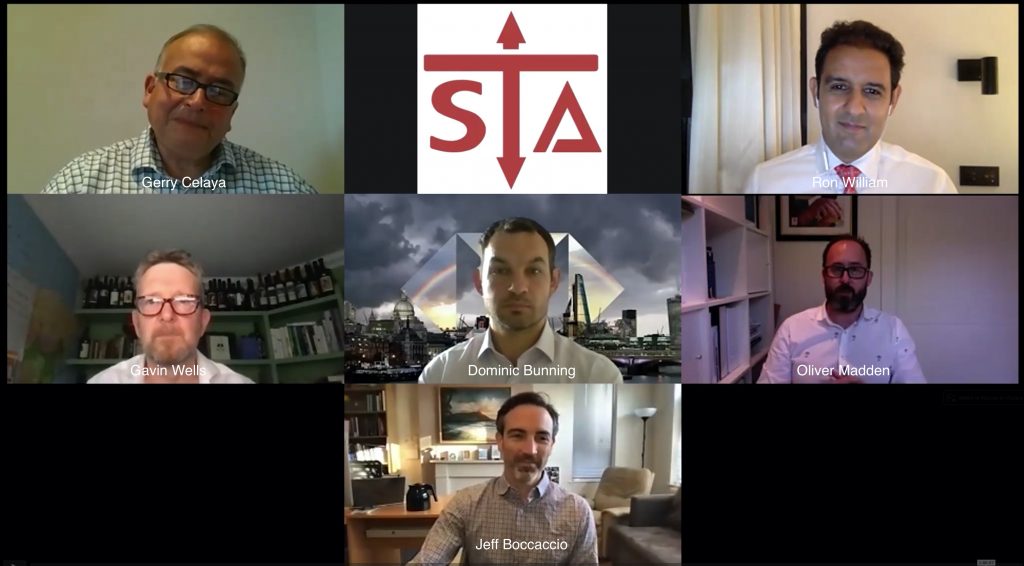 Gavin expertly managed to round up the trio of likely lads who had bravely faced off at our annual January fundamental versus technical analysts’ session of forecasts for the calendar year. (See our blog posted on the 14th of January). They must have enjoyed the challenge because this week they were back for more, exactly 6 months on, at another video conference. How did they get on? Read on.

Of the panel first up was Ron William, Founder & Principal Market Strategist, RW Advisory. Once again he explained the thinking behind his blended, top-down, macro strategies approach, listing the current asymmetric risks between now and 2023 – for perhaps a little too long as this forced him to rush through the last four or so of his bullet points. Several of the key markets he looks at appear to be at critical levels, so that his forecasts for crude oil, gold, the US dollar and Bitcoin depend on whether or not they break these.

UK-based Dominic Bunning, head of European FX research at banking giant HSBC, spoke on behalf of the ACI and economists generally. Describing himself again being the filling between two technical analysts, he wasn’t sure if it was to be trendy tofu or pork sausage in the middle. His views remain largely unchanged since January, though there was more emphasis on short term interest rates carrying more weight as to FX risk appetite, with relative economic strength likely to nudge some rates higher at the end of this year. Do look out for his very interesting chart labelled RORO – risk-on versus risk-off – and how highly correlated global markets really are.

Bang on time the last speaker, Gerry Celaya of Redtower Asset Management, also felt that key US interest rates were likely to rise over the next 18 months, something he had correctly predicted (2% US 10-year Treasuries versus the actual 1.77%) at the last event. Because of this he sees the US dollar strengthening to $1.1300 against the euro, $1.2000-1.2600 to the pound, and the Japanese yen an unremarkable 115.00 per greenback. Another pair of interesting charts he calls ‘value versus pain’ are the Mexican peso and the Turkish lira. He rounds off with a chart of Wetherspoons’ share price because in January his top tip was buying shares in a pub.

Rounding off UK president of the ACI, Oliver Madden, said how these debates were the ‘highlights of his year’ and that he and his team were looking forward to meeting STA members in person at our ‘Freedom Party’ at the National Liberal Club, London, on the 23d September.