Price matters, but Process more so: A lecture by Andy Dodd MSTA of Louis Capital Markets

Introducing himself as an Essex boy who speaks very fast – which he does – and someone not used to giving professional lectures, he’s so engaging the talk went swimming along nicely. He started with a slide his compliance department insisted he must include; every salesman’s bane. Then followed a brief outline of his career since 1986, of which Instinet was the longest stint. It took him a little while to truly embrace technical analysis, he says, because he’d heard, ‘’every galleon at the bottom of the ocean has a chart room’’. He then relented, studied on the STA’s Diploma Course, and became a member of our society in 2012. 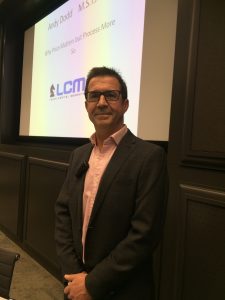 He obviously enjoys and thrives on the subject, starting a gruelling day working from home at 05:30 am and rounding off with a session on social media site Twitter after 21:30. His slides are clear and some of his illustrations amusing, with: ‘Technical analysis is what IS happening rather than what SHOULD be happening’ – a cardinal rule learnt early from a nasty experience on a fundamental analyst’s buy recommendation; this is ‘because stock markets discount FUTURE earnings’.

He runs through his charts outlining each step of his decision-making process, emphasising the need to build, add to, then reduce positions as dictated by his rules. As with so many data vendors, they have a penchant for black backgrounds, something that can make it difficult for a lecture hall audience to see when candles are dark blue, averages and oscillators dark red or green, and support and Fibonacci lines not labelled (see the attached photo).

These are small details in what was a well-timed, practiced, polished performance from a man who clearly knows his subject. He rounded off with, ‘’Learn from your mistakes. I get more street-cred from my clients when I admit that I’m wrong and have been stopped [out]’’. I urge members to look out for and watch the video of this talk on November 12th 2019 which should be on in the member section of the website shortly.