For a nation which prides itself on prudence, saving and balancing the government budget, they are furious at the ECB’s never-ending ‘quantative easing’ and now a minus 50 basis point key ‘lending’ rate. Data published by the Bundesbank, and a very interesting article in the Financial Times, this week show that of the 220 lenders surveyed at the end of last month (September 2019) 58 per cent of banks were levying negative interest rates on some corporate deposits, and 23 per cent doing the same for retail deposits. One of the more aggressive, co-op lender Berliner Volksbank, will levy an annual half per cent on all balances over €100,000. Ouch!
Link to newspaper article (which I hope you can open):
https://www.ft.com/stream/a4d9176d-db1f-4462-8b73-9f20c6ae2381

This then set me thinking about charting, not in uncharted, but in negative territory. I know that market tops and bottoms often look very different, partly because sky high has no limits and because the zero boundary means percentage losses increase dramatically but price moves shrink.

As a sovereign bond veteran I prefer charting benchmark bond yields, rather than prices, as it avoids the pain in the neck that the rollover of future contracts is, as well as a shortening maturity of the issue I’ve chosen – meaning I’m not comparing like with like. I attach a chart of the Swiss Conf yield on 2-year paper since the Millennium. Stepping down nicely, with the most negative interest rate in town, previous support becomes resistance – as the textbook says. However, I think I ought to use an inverted logarithmic scale; not sure if software can cope with that.

My second chart is the price of the zero-coupon Schatz maturing in October 2021. You see, I know it will mature at par so a price of anything over that would be paying over the odds. Is it though, when I’m charged to hold money in my checking account at a dodgy institution which might go under? 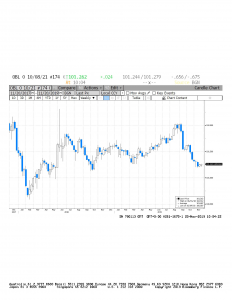 Along these lines I received another interesting article on the subject from Victor Haghani, of Elm Funds. He, among other things, estimates today’s value of a perpetual Consol bond with a coupon of 4 per cent. Go on, back of the envelope stuff, what would you pay this week for something that yields 4 per cent – forever!?