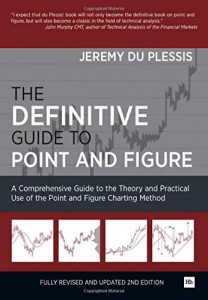 The STA’s October monthly meeting was a real knock-out – but then what else would one expect from Jeremy? Timed to coincide with the release of his second book – 21st Century Point and Figure (our library has a copy) – his new techniques will truly revolutionise this method of charting, dragging it kicking and screaming into the new century.

As a Fellow of the STA, he has long and strong links to software developments having founded Indexia Research (now part of Updata) – and it shows. Many of the innovations outlined are not available with most technical analysis packages, so check before you buy. Skipping smartly through from its nineteenth century origins using columns of exes to track ticker tape prices, through formalisation of methodologies (noughts and crosses) in the early twentieth century, to its fall from favour in the 1980’s because of the spread of personal computers (they struggle with all the data points needed).

Logarithmic scale helped revive the format and is something we have done intuitively when choosing the box size for any instrument. The choice will reflect the absolute value of the share/commodity/bond or whatever as well as its average volatility. From here it is a quick step to using the Average True Range for the box size, though he seems to prefer using a percentage of face value. He has also introduced rectangles which are used to signify sudden sharp moves with little or no trading between price levels. 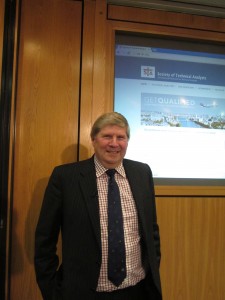 With each column he then works out its arithmetic mean, adding them up and dividing by a set number of columns to create moving averages – and a crossover system. In markets where this is possible, he also plots the volume for every column as a histogram below the price chart. Again using the mean data for each column, one can calculate all sorts of oscillators, something that up until now had not been possible. He likes using bands which reflect volatility like Bollinger and Donchian channels and has also looked into oscillators that measure the distance from a forty-five degree trend line – giving something akin to overbought and oversold measures.

I heartily agree with Jeremy that this is the most exciting thing that has happened to point and figure analysis for quite some time – his innovative use of oscillators and other indicators with point and figure charts is ground breaking. Thank you for sharing it with us.

This talk will be available to STA members in the member’s section of the website in the next few days.