On our best behaviour: Tips from the top

For those of you who could not make it to the STA Annual Dinner yesterday, we offer a glimpse into what was another successful and enjoyable evening. Pre-dinner drinks in the so-called smoking room (which is only permitted on the terrace overlooking the 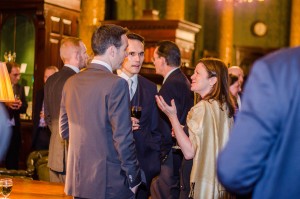 Embankment and the London Eye) followed by a sit-down dinner and guest speaker. Those who wanted to linger could do so in the sensational pub – another glorious room on the first floor of the National Liberal Club.

New faces and old friends seated at round tables of ten, three course silver service British food served by redoubtable ladies, the wine flowed as easily as the conversations. A short update from Chairman Axel Rudolph on the latest news from the society and then Dr Greg Davies of Barclays Wealth, whose speciality is behavioural finance, introduced us to some of its key features and uses.

Emphasising that it is not just about a series of biases, he explained that its concepts were almost useless until we bake them into our decision-making. Because we have a tendency to be comfortable in the moment we procrastinate, putting off investment decisions for a long time only to end up choosing the option with the least cost to ourselves. ‘Fairy’ stories are what get us into buying shares, and peer pressure too, we then turn to ‘post purchase confirmation bias’ not wanting to imagine we have just coughed up for a dud. In this way we end up holding on to losing positions, reluctant to realise losses.

To overcome these shortcomings he suggests: first, ‘know thyself’ in order to transcend behavioural patterns. Next, create the best possible investment environment so that decisions are made when we are in top form. Finally, write down your rule book ‘constitution’ so that by sharing one’s principles it’s easier to stick to them.

The core of these ideas are used extensively by the military knowing one has incomplete data and one is under stress. Start by taking stock, decide on the objective, create a series of options, and then PAUSE!

These steps would make a good guide not just when investing but also when dealing with confrontation, difficult people, and irritations.