Mantras peddled by the fund management industry: Spot and avoid

The wild gyrations in global markets since the Brexit vote to leave the EU have brought out the best and the worst in markets and pundits. Volatility in UK shares following the vote to leave the EU is “no reason for any of us to panic”, the former governor of the Bank of England Mervyn King said. “I don’t think people should be particularly worried, markets move up, markets move down. We don’t yet know where they will find their level and the whole aspect of volatility is that there is a trial and error process going on before markets discover what the right level of stock markets and exchange rates actually are. What we need is a bit of calm now, there’s no reason for any of us to panic.”

That’s the sort of attitude! ‘Keep Calm and Carry On’. What we did get was a global reaction to the fact that the status quo was starting to crumble, that elites were losing their grip, that an island nation can and might destabilise whole continents.

Which led me to think of mantras, dodgy dictats, and manky maths often trotted out by fund managers. First in line on the 24th June was, ‘one must have a five year horizon to invest in the stock market’. Then came, ‘a weaker pound is good for UK business’. Not forgetting that old chestnut: ‘markets hate volatility’.

Think of other standard variables plugged into equations, such as economic recovery is just around the corner, interest rates should normalise shortly around 4 per cent, and inflation will revert to its target rate (and long term mean of 2 per cent) any day now. I think that as technical analysts we are better prepared to move with the times and to question received wisdom.

These issues reminded me of an article written by finance guru Paul Lewis for FT Money on the 18th June. In it he compares the very long term returns of straight, boring, deposit accounts versus equities. He states: ‘I’ve always been suspicious of claims that you’ll get a much better return in shares than cash’. He picks through flaws in the comparison, like using Treasury Bill rates as a proxy for bank account interest and including dividends but excluding fees when investing in shares. For data going back to 1995 best-buy cash accounts produced better returns than a FTSE 100 tracker over most investment periods. Only periods over 18 years showed shares outperforming cash. Ouch! 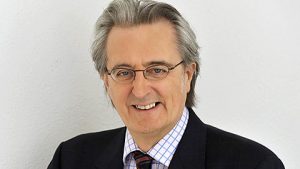 Do open this link for his surprising article.

A freelance financial journalist since 1987 his Money Box programme at noon Saturdays on Radio 4 is well worth tuning into.