Larry the lad looking good: Despite trading since 1962

I was so looking forward to Larry Williams’ Fireside Chat with the STA’s Jeff Boccaccio on Tuesday the 8th November. For the first time the web-based presentation was open to STA members, their guests, plus all and sundry as a gesture of goodwill to all those interested in technical analysis. The legend didn’t disappoint.

Discussions started with long distance running as the theme, Larry in the US Virgin Islands and Jeff in the UK swapping notes. ‘’Running, like trading, is painful and it requires training’’ says Larry, a pastime he took up in 1962 while at university in Oregon. Like fishing, which he also enjoys, these sports are ‘Zen’ and provide a break from the markets – though he does admit to calling his broker during 3 of his many marathons. He also believes that ‘’great traders don’t get emotional about anything’’.

Despite having created several momentum-based oscillators, including the Williams % R and the Ultimate Oscillator, he warns against using too many of these ‘’as they are pretty much the same thing’’. He’s also adamant that seasonals are not cycles (which in themselves do not predict magnitude), that he looks at economic data as well as technicals, that he favours the Commitment of Traders report and that ‘’volume can be terribly misleading’’, for example when year-end selling for tax reasons occurs. ‘’The most important thing about oscillators is that there are patterns in their momentum’’. 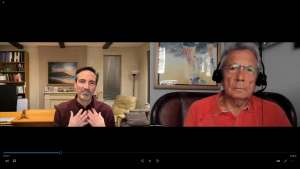 He favours simple moving averages, especially the 50-day one, though when he started off, because there were no adding machines, he favoured 10 and 100-day ones as they were easier to calculate. ‘’When push comes to shove I look at the chart and one moving average as I like to keep things simple’’.

After 60 years of trading he feels he doesn’t have to prove anything to anyone as ‘’I’ve been in the pressure cooker enough’’. He does enjoy seeing his students winning trading championships, one of whom is his home-schooled daughter the actress Michelle Williams of Dawson’s Creek fame. More surprising is his comment that a study by US investment group Fidelity ‘’found that the most successful investors were those who had forgotten they had an account’’.