Filtering out noise: To see the wood for the trees

Free newspaper City AM is my morning tube-ride read of choice. Topical, relevant, and mercifully concise I can usually get through it by my destination. On the 31st October, they ran an interesting article called: ‘Why cutting through noise is a sound investment strategy’. Highlighted from the text in a blow quote it said, ‘the investor’s chief problem – and even his worst enemy – is likely himself’, originally coined by Benjamin Graham. So true.

Penned by clever cookie Charlotte Ransom, founder and CEO at Netwealth after 19 years at Goldman Sachs (including as partner) she kicked off by saying, ‘noise is the enemy of information’. Which set me thinking which elements of technical analysis help us filter out noise in the market – and hopefully too, irrelevant market chatter.

First, of course, is the focus on price action alone, rather than its ad hoc suggested causes; this stops us listening to screaming, alarmist headlines. Then chart patterns which suggest a market is consolidating and trend lines which do as they say, helping us to keep on track and pinpointing when it’s time to jump ship.

Oscillators can help us spot, and avoid, herding tendencies. The Relative Strength Index, understandably favoured by so many, is a good indicator of a crowded trade and, when combined with divergence to price action, is a trusty reversal signal. 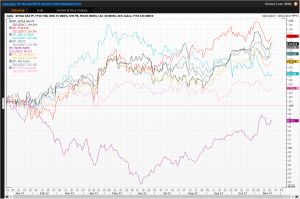 Another one perennially in my tool box is the Commodity Channel Index. Again, it functions as an early warning measure of a market that’s running out of steam and more likely to hold within established trading parameters. Bollinger bands sort of do the opposite, tightening and coiling around prices to warn of an imminent breakout.

Perhaps the most obvious of all is a combination of a logarithmic scale or a rebasing chart, where instruments all start at zero and percentage price moves are plotted. This ensures a correct sense of perspective allowing one to decide what is, and is not, a significant move. All too often overtrading and overly aggressive positioning occur in markets which are basically going nowhere.