Don’t bother day trading: in it for the long haul

Zaheer Anwari is a determined young man – and a confident one too.  A degree in software engineering under his belt but bored with it, he ditched that to teach English and travel around Asia.  Moving into photography, he says he gave that up because ‘the hours and the egos were horrendous’.  Being someone who doesn’t compromise, he started Dynamic Trader in 2007 and hasn’t regretted it once. 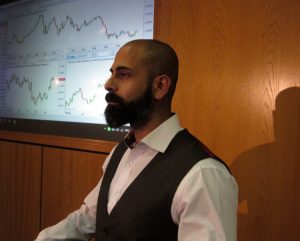 Claiming to spend one hour at weekends preparing his market strategies for the upcoming week, plus a few minutes on weekdays to confirm these views, what he likes is having ample time to do the things he enjoys.  And who wouldn’t?  With this in mind his focus is on trending instruments and holding positions for as long as it takes.

He has a point when he says day trading is not for retail investors but for bankers.  That’s because the professionals make the bulk of their money not by taking positions but by the small difference between bid and offered prices.  That’s their edge and new traders must discover theirs.  The advantage they have is in not having picked up bad habits along the way – and can therefore ‘adapt old techniques for modern conditions’.

Staring with a watch list of his favoured shares and FX rates created on E-Signal software, he filters out those which look interesting.  He recommends not spending too long on any chart because the ‘good ones will slap you in the face’.  He then plots significant horizontal support and resistance levels plus 50 and 200-period moving averages.  Preferring instruments with at least ten years’ worth of history, he plots monthly, weekly, and daily candles saved in individual files.  He also keeps a close eye as markets approach big round numbers like 10, 50 and 100.

Running somewhere in the region of a 8 core positions, he tends to wait to be stopped out rather than predict price targets.  Claiming that risk reward ratios should be ‘one to infinity’ he has held some of his more successful positions for 8 to 13 months.  This is useful when one starts trading as one can hold down the day job and do this on the side.

Certainly the share charts he favoured have had parabolic bull runs.  Unfortunately they reminded me of moves in smaller companies leading up to the dot-com boom and bust of the year 2000.