The TV and media team and IG are a slick lot with a busy production schedule. As well as producing text and video content, they coordinate news feeds for the platform and do their own analysis. From Monday to Friday there are 3 TV slots: at 07:30 London time (Pre-European open bulletin); 10:30 Charting the Markets; 16:00 Trading look ahead.

Kicking off the week, the month, the year and a new decade was Joshua Mahony on January the 6th. He points out that because of US action in the Middle East, markets have started the year in ‘risk-off’ mode, wary of further combative rhetoric between the United States, Iran and Iraq. He reminds us of data released earlier and explains the impact revisions have, plus flags key data due, in this case US employment on Friday and the planned signing of a Sino-US trade deal on the 15th.

He covers the FTSE 100, the Dax and the Dow Jones Industrial Average, shifting between time frames while keeping the same oscillators (MACD and stochastics) throughout. His trend lines are sometimes drawn unconventionally, an upper one in a rising trend (joining the highs), or a lower one in a downtrend (joining the lows). On his charts, he also doesn’t discard all obsolete Fibonacci retracements, and correctly focuses on the gap in the gold price over the weekend.

I would suggest technical analysts should prepare a special set of charts for lectures and video presentations, keeping them as clean and clear of clutter as possible, drawing the viewer’s eye to the focus of the analysis. By all means, have another set of working charts, which can be as messy and unconventional as you’d like. As they saying goes: don’t wash your dirty laundry in public. 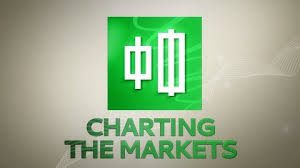