Bubbles, busts, and how to spot them: Books at bedtime

Rather than chamomile tea and a collection of soothing fairy tales for your night table, I have better ideas as to what you should read this winter. Not horror stories or fantasy gladiators, but cautionary tales; sort of in the vein of Struwellpeter. 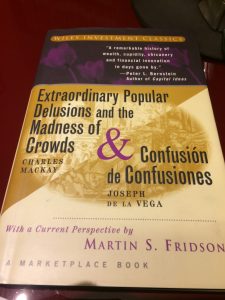 Almost 25 years ago I bought a hardback copy, printed on acid-free paper, from John Wiley & Sons, Inc. Edited by Martin S. Fridson, it was actually 2 books in one. ‘Extraordinary Popular Delusions and the Madness of Crowds’ by Charles Mackay, first published in 1841, and ‘Confusión de Confusiones’ by Joseph de la Vega, a Portuguese Jew living in Amsterdam in 1688.

Tulip mania, the Dutch East India Company, the South Sea Bubble, the Mississippi Scheme, Mackay goes on to list another 86 of such schemes. La Vega talks of fractional ownership, balances at the Bank of Amsterdam, and the arrogance of the shareholder. The former saw ‘’periodic outbreaks of mass hysteria’’ while the latter concerns himself more on ‘’the cunning behind the market’s convulsions’’.

This month FT Weekend reviewed two new books running along similar lines. ‘Boom and Bust: A Global History of Financial Bubbles’ by William Quinn and John D Turner, and ‘Money for Nothing: The South Sea Bubble and the Invention of Modern Capitalism’ by Thomas Levenson.

An academic at MIT, Levenson postulates that the 18th century scientific revolution and the power of maths made people think differently about the future, money, risk and probability more generally.

Quinn and Turner focus on the underlying conditions which create a bubble: plentiful, cheap credit, good marketing, and popular excitement surrounding an issue. Politics and technology, though secondary inputs, can be very damaging especially when integrated into the broader economy and the banking system.

None of these books cover the most pernicious speculative excess ever: The Darién Gap Scheme. Backed by 20% of the money circulating in Scotland in 1698, passages on a ship were sold to people wanting to start a new life in a Central America (Panama), where they were promised a land of milk and honey. So successful was this sale that another ship was organised a year later – not knowing that the place was an insect and disease infected swamp where all the first passengers died. Spanish forces then seized the second lot in 1700. Tell me about the real cost of excessive speculation.