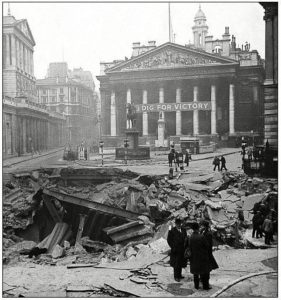 Fairly recently the Old Lady of Threadneedle Street took to Twitter with @bankofengland.  Describing itself as a forum for staff to share views that challenge – or support – prevailing policy orthodoxies, opinions are clearly labelled as those of the authors and not necessarily those of the UK’s central bank.

This month Paul Schmelzing, a visiting scholar from Harvard University’s history department, wrote a fascinating piece entitled: Venetians, Volker and Value-at-Risk – eight centuries of bond market reversals.  His succinct text does not give details of where exactly he got his data, but obviously it’s a collage from all sorts of sources.  Interestingly he notes that official interest rate targets have only a loose correlation with bond yields and, as we know, money market and Treasury bill rates can shift towards and away from long-dated rates causing changes in the shape of the yield curve.  He also notes that ‘bond turbulence can be highly discriminatory across maturities’.

The focus of his analysis is to try and see whether the secular bond bull market which started in 1980, engineered initially by Paul Volker, head of the US Federal Reserve System, is about to end.  If so, he posits three types of bear markets.  One caused by rising inflation, another due to a sudden shift in sentiment, and a third where banks are forced to dump bond holdings in order to comply with VAR requirements and calibrate risk assets.

Rather gloomily, and in line with current conventional wisdom, he concludes that global bond markets are likely to be faced with higher inflation, yield curve steepening which ‘implies double-digit losses on bond holdings, subpar growth in developed markets, and balance sheet risks for banking systems with a large home bias’.  This last point is very much the case in Italy and Japan, less so in Germany and the UK.  As a contrarian I’m tempted to retort using a Mark Twain quote: ‘the reports of my death are greatly exaggerated’.

His chart, however, is priceless!

Here’s the link if you’d like to see the article in full. 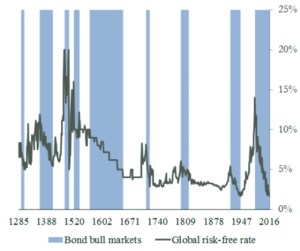