Are you a numbers person? And does that make you a metrologist?

This was a new one on me, so I didn’t just Google it but looked up the word in a proper, big dictionary. It tells me that metrology is the science of weights and measures and comes from the Greek word metron. Which confused me, as I was brought up believing that the metric system was instigated by Napoleon Bonaparte in the early 19th century. It was supposed to be ‘à tous les temps, à tous les peuples, (for ever, for all). It is also linked to the decimal system of numbers, both of which were almost universally adopted by the 20th century –bar a few die-hards like Canada, the UK and USA.

A review by Chris Allnutt in the Weekend FT of James Vincent’s book, Beyond Measure: The Hidden History of Measurement, sent me up this cul-de-sac. The author notes that: ‘Metrology is a science that has the potential to be a progress of understanding, but it also hides a history of manipulation and machination.’ He continues: ‘Nowadays the act of measuring something is so instinctive as to seem organic, but it is a uniquely human invention that has evolved considerably over time.’

But there are vestiges of far older measurement tools still in use today. These often involve body parts, like keeping someone at arm’s length; an inch which is literally a polegar, or thumb, in Portuguese; a foot needs no explanation. The Celts preferred counting in units of twenty (fingers, thumbs and toes), something which is still used in the French for eighty (quatre-vingt) and ninety.

Fractions were widely used in many professions, especially the investment banking world of money markets and bonds. US Treasury note and Treasury bond futures are still quoted as thirty-seconds and half of these (i.e. sixty-fourths). There was a joke when I started work that toffee-nosed UK gilt brokers when asked for a two-way price would always say: ‘’five-eighths a half’’. 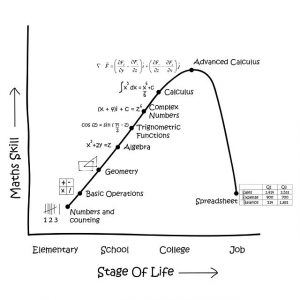 Learning maths can be divided into clear steps, as the amusing picture shows. Having grasped Arabic rather the Roman numerals (something the famous Fibonacci introduced in Italy from his university studies in Alexandria), geometry was easy for me as it’s so visual, but I started struggling at the algebra stage. These basic skills are all assumed as read in technical analysis.

Charts have price values at their core. Where things get more complex is when we move on to more abstract numbers: Pi, the Golden Mean, infinity… Ratios we can do, and are a basic of many commodity markets. Percentage changes in a group of related products is super-easy if you have today’s great software. Foreign exchange is always a relative, not an absolute measure, with in reality neither bull nor bear markets. Some oscillators have no upper or lower boundary, while volume and open interest have no higher limit. Little by little these limitations should make you pause and question the strength of your chart analysis.