Rather than the usual monthly format of guest speaker presentation followed by a handful of questions, January’s get together encourages audience participation and debate between the speakers themselves. The STA was lucky to have a panel of three very different invitees on Tuesday, covering a broad range of markets, global trends, economics, and politics. 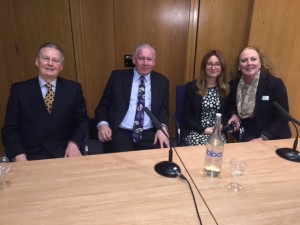 Kicking off procedures, with a series of excellent and unusual charts of the credit markets was Societé Generale’s head of cross asset technical analysis, Stephanie Aymès. She pointed out that it had already been an ‘interesting and challenging start to the year’ and accordingly she would focus on ‘risk’ and where this might lie. Using log scale charts with Elliott wave and Tom DeMark counts, she focused on moves following important turning points in June 2014 (peak economic growth). Holding no strong views on UK and US treasury yields, she believes 2012’s lows mark a major base. US inflation indexed five-year swap yields were poised on key support and, were this to break, it would imply a severe fall in inflation. Compressed volatility, especially in the FX market, hints that Asian currencies face more weakness ahead and that the Japanese yen, were it to break below 116.00 per US dollar, and should benefit from ‘risk-off’ sentiment.

Next up, Christian Schirmeister, senior consultant to the London Metal Exchange. A nuts and bolts man through and through starting as an apprentice at Metallgesellschaft in Frankfurt in 1979 and spending much of his career working through the firm’s various divisions. He explained that Britain, having been self-sufficient in metals until the 18th century, started importing these from its colonies helped by the advent of the telegram in 1832 and the opening of the Suez Canal in 1869. Ships from all over the world took around three months to arrive in London, sailing dates and times confirmed, and the reason non-ferrous metals on the LME trade on a rolling three-month forward basis.

Final speaker David Fuller, STA member since 1970 probably needs little introduction, and as Chairman Axel Rudolph noted: ‘as a FSTA he doesn’t need any slides’. Describing himself as ‘the last official warm-up act’ he launched into an overview of stock markets noting shaken confidence, fear, overhanging chart formations, and lack of breadth. Oil’s death spiral because of the Saudi’s mistaken and out-dated gamble to curb US shale output demonstrated OPEC’s loss of control over prices which will never retest their highs. Middle East chaos was exacerbating Europe’s migrant crisis. Treasury bonds, which have seen a 36-year bull market, were ‘an accident waiting to happen’ as economies eventually recover. Technology, including biotechnology, currently correcting, would be the drivers of the next secular stock market bull trend. Technical analysis, which shows us what investors are doing, would be invaluable in enabling us to monitor momentum moves, and their eventual reversals, in these and any other sectors.

Look out for the video recording which will be uploaded to the members’ section of www.technicalanalysts.com shortly.