When markets shift two per cent: in a day

There are many rules of thumb involving market moves and the size of these; a ten per cent stock market decline is called a correction and 20 per cent drop a bear market. But what can we conclude when markets move – up or down – by more than two per cent in a day?

I have deliberately set the bar fairly low because I want to look at a broad array of financial instruments. A daily two per cent change in the value of a major currency pair is considered large, will have a significant impact on lots of transactions, and will be felt in tourists’ pockets. A ten per cent daily move and one might be accused of currency manipulation.

Compare this with a penny stock, or a commodity which trades rarely or is controlled by only a handful of players. Two per cent might be the spread between the bid and offered prices. Daily moves of between ten and twenty per cent the norm, and some instruments can easily double or halve in value regularly. This is often the case of penny shares at rock-bottom prices, fledgling companies that are held by just a few interested parties, and bonds where the issuer is close to an imminent default – at which point the vultures will circle, precisely because of the potential for very large price moves.

Between these two extremes lie most major and emerging market equity indices; not frontier markets though, which tend to behave more erratically and are likely to suffer more from exchange rate moves. I would suggest that a daily two per cent rally in the former might be classified as a very strong move, while a two per cent decline might be a shock but not a catastrophe. A daily four per cent drop would certainly impact the bottom line and might warrant a very serious review of asset allocation, while a ten per cent loss in a week is traumatic indeed. 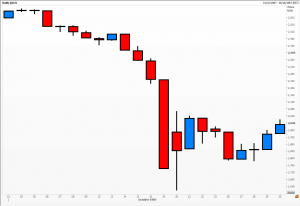 Recently the Shanghai Composite index, which had rallied 59 per cent since January, has seen daily moves of four per cent, dropping 20 per cent in a fortnight (see chart). 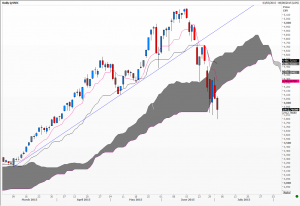 Keen data sifters out there: please let us know which market shifts have had a lasting impact on your psychology.