The World for Sale: Money, Power and the Traders who Barter the Earth’s Resources

This book’s title has a little in it for just about everyone. Money, power (including political), avarice, swindling – not forgetting deforestation and climate change. I recently read its review, by Felix Martin of fund manager 1167 Capital, in FT Weekend where the theme was: ‘the 2000s witnessed a [commodities] Supercycle the like of which the world had never seen before’. 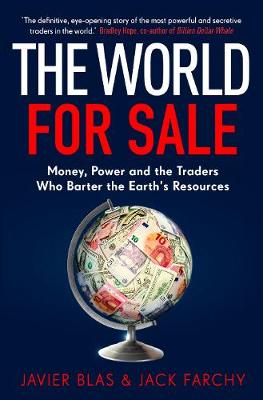 Written by Javier Blas and Jack Farchy – both ex-Financial Times and Bloomberg News – and published by Oxford University Press in February 2021, the pair have obviously written about, and spoken to, key movers and shakers of the commodities trading clan over the last decade or so. They and the reviewer suggest that the commodities boom of the 2000s ‘catapulted a group of previously low-key international commodity trading houses – Cargill, Vitol, Trafigura and Glencore – to extraordinary financial wealth and political power’.

The authors argue that four main trends powered the commodities boom starting in the 1970s: Nationalisation of oil industries, the collapse of the Soviet Union post 1989, China’s economic surge in 2000, and unlimited global credit – post dot-com 2000 and post Great Financial Crisis in 2008. They forget to add the effect of swashbuckling money in investment banks, and their customers craving for a piece of the action. Other reviews of this book have also been positive, suggesting a riveting read.

I’m slightly alarmed that the authors claim that ‘the glory days of commodity trading are over. The same forces that propelled them to years of dominance have turned in the past decade to headwinds’; obviously their time horizon and spectrum is more limited than mine. Commodity trading has been the mainstay since the Bronze Age, the origin of the Silk Route, the discovery of the Americas and, not forgetting, the invention of candlestick charts in the wholesale rice markets of Japan. I think their vision has been shrunk by the late 20th and early 21st century’s focus in the Western financial markets on equities.

Coming from a commodities background in Argentina and Brazil, plus working at commodities desks (and let’s not forget that it is from here that financial derivatives evolved) in banks and a trading house, I can attest that 50 years ago and still today, newspapers, the internet and social media have extensive coverage of commodity prices, weather, demand and trade flows. As an example, the biggest Brazilian TV station has a section called Globo Rural devoted exclusively to the subject. You probably will need Google translate for this, their home page:
https://g1.globo.com/economia/agronegocios/globo-rural/