The Old Lady banks on Alan Turing: The new face of the (polymer) £50 note

At Threadneedle Street they’ve been working on their social media profile avidly for the last year or so. For the launch of the new £50 pound note they’re in overdrive, an opportunity to show off their softer side. For the Twitterati, here’s a nice link: https://twitter.com/bankofengland

Introducing the face of the new £50 note – the father of computer science, Alan Turing.” Find out more by clicking here. They even rolled out Larry the Downing Street cat to plug the event.

Sky News followed up with a lovely short film clip

And for good measure @GCHQ got in on the act.

‘We’re delighted that Alan Turing has been chosen by the Bank of England.’ 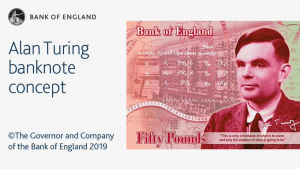 I must say, I knew little about the man who sadly took his life just shy of his 42nd birthday, having been banned from working because he was a convicted homosexual. This Maida Vale-born lad was the head of the team at the Government Code & Cypher School based at Bletchley Park which managed to crack the Wehrmacht’s Enigma machine.

He was definitely considered an outsider, being on the autistic end of the spectrum, struggling with a speech impediment, and whose handwriting was barely legible; needless to say, he was anti-social. Education, and academia more generally, tends to struggle with people like this because they don’t see what they might add. The corporate ladder, civil service, legal profession and non-governmental bodies eschew them as tricky.

But my point is: variety is the spice of life. Technical analysis is also considered still today as an outsiders’ subject. But what’s wrong with that? The more varied the inputs, the greater the chance of a successful outcome.