Summer sales: When is a discount too good to be true?

The summer sales are in full swing on the UK High Street, red banners proclaiming savings of 20, 40 and up to 70 per cent off the original retail price. Having become used to year-round promotions, become cynical about marketing ploys, and dubious about the quality of discounted goods on offer, most shoppers now take it all with a pinch of salt. Are there lessons here for technical analysts inspecting deeply discounted financial instruments?

With one eye on the price of Greek government bonds, many of which are at eye-watering yields while suffering nauseating price swings, I note a series of rules of thumb are being invoked. One of these is that, when any bond drops below fifty per cent of par value, it is on its way to defaulting. Over the last fortnight bonds of the Hellenic state maturing in nine to fifteen months’ time have often dropped below 50 cents, implying yields of up to 30 per cent annualised. However, a Samurai bond of theirs (11.7 billion yen) which was trading at 44.73 yen per 100 nominal, was repaid in full on Tuesday making those lucky enough to have dared buy anywhere near the lows a tidy profit.

Of late the mining sector has been having a difficult time, lumbered with huge debts and falling prices. One of the hardest hit is UK listed Afren plc where the share price dropped to just 1.80 pence, down from 15.00 pence a year ago. Certainly a so-called ‘penny’ stock and one whose chances of recovery look slim indeed. 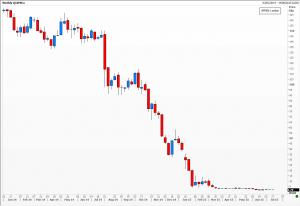 Precious metals are also priced at a fraction of peak, gold at a 40 per cent discount and platinum off 56 per cent from the bull market high. However, these levels are not exactly attracting a frenzied crowd and may have to drop further before expressions of serious interest emerge. 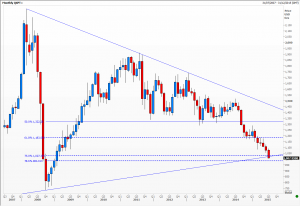 Finally the foreign exchange market, where the US dollar has strengthened considerably over the last 12 months against a raft of other currencies. Sterling has held up best, off just 9 per cent, while of the majors the hardest hit has been the New Zealand dollar losing 24 per cent of face value. This is as nothing to the Brazilian real which has managed to shed 45 per cent of its worth in 12 short months. This has wide ramifications for the country and everything in it. 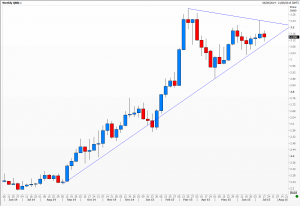 The lesson here is that the value of a discount depends almost entirely on the eye of the beholder. Caveat emptor.