Revisiting a format the STA has embraced for some years now, January’s regular monthly meeting on the 10th was a panel discussion on the outlook for foreign exchange markets in 2023. Speakers were asked to stick rigidly to their allocated 15 minutes (of fame!) so as to allow enough time for questions from the audience. They did – with minimum prompting by moderator Gavin Wells.

Another few goodies were thrown in. STA chairman Eddie Tofpik awarded David Watts BSc Eng., MICE, a fellowship to our society for his contribution to the dissemination of technical analysis. Not least for the wonderful 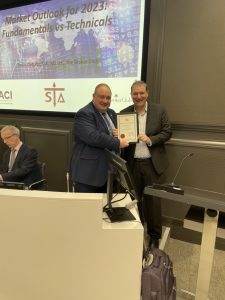 book he compiled last year called ‘Striking Gold’ Celebrating over 50 years of the Society of Technical Analysts. Copies of this were presented to the panel of speakers while David picked up his framed FSTA certificate which, he tells me, will be prominently displayed on the wall behind his desk as background in Zoom meetings.

Because December’s Christmas party had been cancelled due to a train strike, a belated one was held to coincide with the panel debate. Plenty of drinks and a selection of canapés was passed round by delightful catering staff at One Moorgate Place, London EC2R 6EA, the rather fab headquarters of the Institute of Chartered Accountants in England and Wales. A merry crowd from the three societies chatted and exchanged ideas. 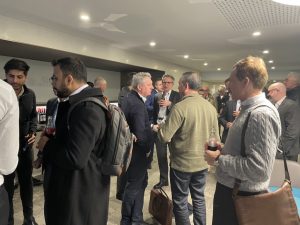 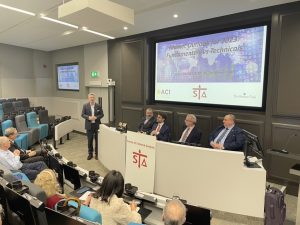 To the speakers. Because the meeting was held under Chatham House rules, I can tell you who they were, explain the overall themes of what was said, but cannot attribute views to individuals. First up was technician Tom Pelc, CIO of Fortu Wealth and founder of Pelc Enterprises Ltd. Then Robin Winkler, economic historian with a BA and PhD from Oxford University who tumbled into macro research at Deutsche Bank in London. And finally Michael Hewson, a well-known face from media appearances as Chief Market Analyst at CMC Markets (UK). I should explain that, understandably, his market focus was rather shorter term than the others.

Themes embraced by the speakers included ‘de-dollarization’, where in 1999 US dollars accounted for 72% of holdings while today it stands at 59%; linked to this they favoured some, but not extreme, weakness in the greenback. Difficult economic and social conditions, not crashes and soup kitchens, but a slow decline into a cycle low at year-end 2023. Inflation is expected to remain ‘sticky’ due to weather conditions and the demand side, yet despite this the housing market is vulnerable. Central bank interest rate targeting will continue to hold attention, with rates edging a little higher and then staying there for longer than might be expected. The 2% inflation target is probably too low and needs reviewing.

Oliver Madden of ACI UK supplied the closing remarks and thanked all those involved.