Seasonality: Does it really exist?

With the British summer social season at full tilt – Queen’s and Ascot this week, Chelsea and Epsom earlier – I was thinking of how this affects markets. Personally I have never been a great one for cycles, agricultural, Fibonacci or otherwise, but it might be worth investigating and embedding into forecasts over the next calendar year.

One of the reasons I feel this is especially important in this economic climate is because negligible or zero interest rate policies adopted by as many central banks as can afford it might alter the balance. To what extent does this distort the normal rhythm of supply and demand, overinvestment followed by shrinking to fit, and attempts at finding an equilibrium?

All too often technical analysis concentrates on the Y axis of the charts, price action (plus a few oscillators and averages on these for good measure); relatively little work has been done with the X axis. Economists have incorporated time into their ideas for as long as they have studied the subject, tending to focus on the long term trends and then trying to subdivide these into minor and countercyclical moves.

For technical analysts Cyclical Principals can be subdivided into Summation, Harmonicity, Synchronicity and Proportionality. These are then subject to left and right translation – something Murphy thinks is possibly the most useful aspect of cycle analysis. If this year’s predicted El Niño materialises, one could see a right translation in oilseed crops and a squeeze on wheat prices.

Gann is probably the technical analyst who is most closely associated with price moves relative to time, though interestingly Ichimoku theory also believes that these two are inextricably linked. See the charts attached for examples of these. 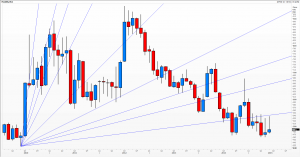 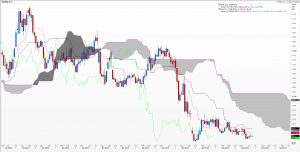 Certainly markets often get thinner over the summer holidays in the Northern hemisphere, so much so that the ECB has brought forward its QE bond buying programme. I also find that September is not the busiest month, but August as thin markets and preparation for the second half of the year unleash ahead of time.

Do please write in with your views on this complex subject.