The STA is very lucky in that its pool of talent is deep and its contacts list extensive. Because February’s speaker unfortunately had to pull out at short notice (Kevin Bull will instead speak on the 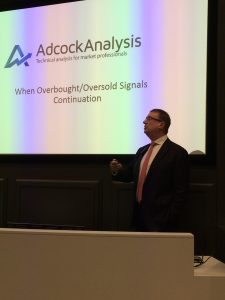 14th May), Richard Adcock, STA Company Secretary and member of the journal committee, gamely stepped in. His day job is as Managing Director for Adcock Analysis which offers independent analysis specialising in foreign exchange and interest rates. Maybe I misheard, but I think our chairman Tom Hicks made a Freudian slip and introduced him as Richard Adhoc!

Starting his career at Investment Research of Cambridge he, like the legendary Ellie Gifford, tried to find ways around the limitations of the relative strength index in trending markets. She coined the term ‘the pressure index’ while Richard has been working with a combination of momentum, trending and sentiment – which he believes ‘are the three most important things in markets’.

His key tool is a candlestick chart with the RSI plotted under it and, under that, the Moving Average Convergence Divergence (MACD) oscillator. To decide whether to give the RSI some leeway, he looks to see which of four variants are on the chart: whether the MACD’s moving average is above or below the zero line and whether its signal line (the 9-day exponential moving average of the MACD itself) is above or below the longer moving average. Simple, but very effective.

He also explained how, for the many foreign currency pairs he looks at, he favours a scorecard measuring those in the strongest uptrend to those with the strongest downtrend, and lists the neutrals in between these two. He works with a number of indicators and the results have a maximum rating of +18 or -18.

He offered a two-week free trial to STA members who can view his website www.adcockanalysis.com

The video of his presentation – in the plush and very comfy auditorium at One Moorgate Place – will be available to members, shortly. 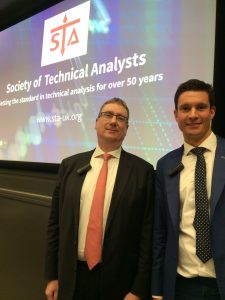