Interesting to hear that Kevin dedicated himself full time to the study of technical analysis in 2009 and passed the STA Diploma exam in 2010; congratulations, say members and fellows. His first year’s trading foreign exchange resulted in losses, and his talk was about how he recouped that money and developed his trading style. He now runs a firm called the FX Trading Company.com with the tag line ‘it’s a valuable future’. I believe he’s running a course soon which STA members might find interesting.

Loosely based on the ideas of W D Gann, and heavily influenced by R N Elliott, he ignores all news and events, not just sticking to technical analysis but also 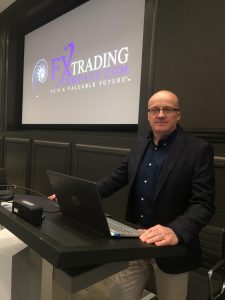 concentrating on the market’s absolute price range and ignoring closing prices on all time frames – with important implications for candlestick charts. He obviously loves the mathematics of the market and “it is the price extremes that produce the mathematical grid the market is working to”. On the other hand, when drawing Fibonacci retracement levels, he only uses the height of the impulsive wave, not the total height of the whole wave. As well as the conventional time frames, he favours 360 minute charts.

His talk was well-prepared and he has a nice calm voice. Interestingly he used video recordings of previous screenshots, explaining the wave counts and his thinking when working through a trade; unsurprisingly, the forecasts and results proved correct. It’s also a pity so few of the examples used are current, and some are very out of date.

Under the price chart he plots the Relative Strength Index with two moving averages, looking for divergence to price. A second oscillator called Composite – a new one on me – was not explained.

The talk generated many questions from the audience.