Panellists kick off with a bang: New year and new venue

As has been the case for the last few years, January’s STA monthly meeting takes a panel format, each speaker asked to cover a topic of their choice, outlining their forecasts for the coming year. Hosted by Tom Hicks, our new chairman, he pre-warned us that audience participation would be required.

First up was Clement Thibault of Investing.com The first, and now senior analyst at this Israeli-based company which, he says, is among the top five of its kind; they can chart 250,000 different 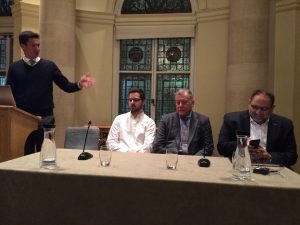 assets with coverage in 30 languages. Quite a feat! He did not balk when, after a quick show of hands, it was as he had feared: most of the audience knew very little about crypto currencies and block chain.

Because they are resistant to censorship, confiscation and inflation, their advantages are far more obvious in less developed countries. He estimates that today 3 per cent of venture capitals’ $100 billion under management is parked in crypto. Looking ahead, he sees security token offerings, as opposed to initial coin offerings, as the way forward. Assets can be divided into smaller parts allowing one to buy a share of, say, important real estate, farmland or artworks.

Next up was Dubai-based Avramis Despotis, founder and CEO of Tradepedia LLC. A self-styled enthusiastic educator and expert instructor in technical analysis, he has ten years’ worth of interbank experience under his belt and another ten at his firm. Keeping to the bare bones of trend-spotting, he sees cable dropping to $1.1700, gold holding in a range below resistance at $1375, and he holds a negative bias on European stocks. Interestingly, when setting up his charts, he favours looking back over 75 periods, be these hours, days or weeks. 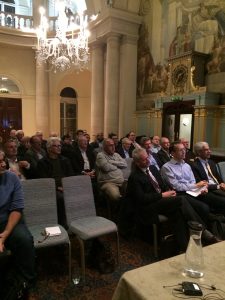 Last up was STA Fellow Robin Griffiths with a broad sweep of macro outlook. ‘’We are still living, and will remain in, the new normal’’. The credit bubble is here to stay and though the system (the link between bond yields, GDP and inflation) is broken, we have to operate within it. Companies are now the biggest buyers of their own stocks, rewarding the C-suite and saddling their firms with debt, something he describes as ‘immoral’. Computer algorithms are the second biggest buyers of stocks, while those who buy to follow an index are adding to the herding tendency.

The Dow Jones Industrial Average has given a ‘full sell signal’ because almost 90 per cent of its individual stocks are trading below their 200-day moving averages. He sees a potential US recession, but probably not until 2020. He also believes that because debt outstanding is so very huge, it will eventually have to be written off. 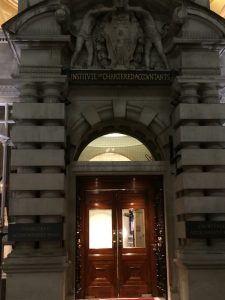 Tom rounded off with a set of straw polls, answers via a smartphone app, on our views on a handful of markets. Intriguing that this year many were split 50:50 between positive and negative views.

As for the new venue, One Moorgate Place, it’s a real showstopper. Lots of different styles and sizes of rooms, some grand others modern (the members’ common room would give WeWork a run for their money), staff passing around drinks and nibbles, and no photo ID required. All round a win-win event.