Nice legs: Shame about the face

Or to paraphrase: the Hindenburg Omen has a good name; shame about its reliability. Developed to monitor shares on the New York Stock Exchange, it could be used for any other major international index but, surprisingly, is not. While the ideas behind it are sound, its track record isn’t exactly stellar.

Named after the German Zeppelin airship which burst into flames and crashed in 1937, it’s supposed to warn of an impending stock market collapse. It monitors the number of shares in New York notching up new 52-week highs versus those hitting 52-week lows; a sort of measure of internal market strength. According to Wikipedia the rules are as follows:

A similar idea to Dow Theory, in that the indices must back each other up. If some stocks are raging bulls, and others howling bears, this cannot be healthy. To keep a sense of perspective an exponential moving average is used as a benchmark.

On the 3rd December 2016 Zero Hedge (a web site I can recommend for alternative and sometimes alarmist articles) wrote that technical analyst Tom McClellan had found one of these sinister patterns in the S&P 500 index. The link to the piece is attached below.

While his warning now appears premature, one must admit that the grudging rally over the last two months or so, and the tiny daily ranges seen (causing the VIX index to collapse) are really rather unusual, especially at record highs for the index.

In summary: just because it’s technical analysis, doesn’t mean it ought to be followed unquestioningly. 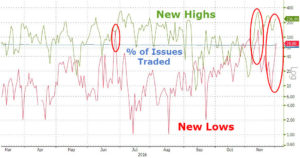 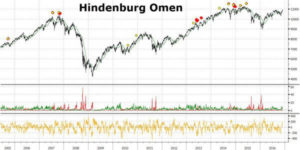