News and views from the Bank of England: ‘Charts and Fundamentals in the Foreign Exchange Market’ 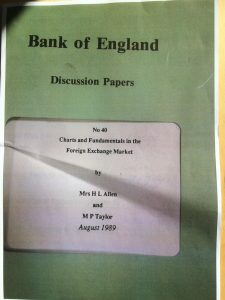 Many central banks are in hot water at the moment. Some, as the saying goes, are like frogs and toads which, when placed in a pan of tepid water and then heated up, boil to death rather than jump free at the start. The bankers’ reaction this month is to go on their usual annual long weekend in Jackson Hole, Wyoming to chew the cud and act casual-like.

The problem is that, at a gathering of like-minded thinkers, creatives are discouraged, consensus opinion prevails, and innovative ideas are killed at birth. Such a pity when these people have access, usually for 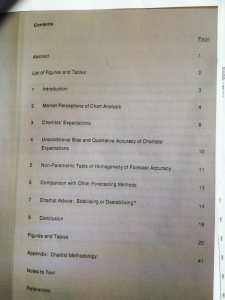 free, to a pool of analysts, researchers and top brains.

The photos I attach with this blog are courtesy of Anne Whitby FSTA. They are of the original Discussion Paper number 40 published by the Bank of England in August 1989. The series was designed to ‘give wider circulation to research undertaken in the Bank’. Since its independence on the 6th May 1997 it, like Mr Greenspan at the US Federal Reserve, have preferred to keep their models close to their chests and utter gnomic comments.

The paper’s table of contents is short and to the point, with another 20 pages of figures and tables; note the use of non-parametric statistics. I urge readers to look carefully at the Abstract page we’ve reprinted. ‘This paper presents some empirical evidence…of a major form of non-fundamental analysis – chartism – in the London foreign exchange market’. It continues: ‘Charts and fundamentals appear to be used largely as complementary, rather than competing, methods of analyses. And it rounds off with a resounding, ‘the effect of non-fundamentalists should not be ignored when analysing the market’. Straight from the old horse’s mouth.

You can download a copy of the Discussion Paper via the Bank of England archives. 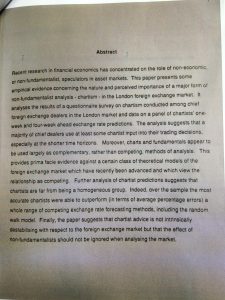