In the mornings I work from a desk, admittedly of Victorian workhouse-style layout, facing East over The Shard at the Financial Times’ headquarters. Always the first one in on the 5th floor, it’s lovely to watch the sun rise and shift around me as the hours go by. But we’re moving, going back to the original building, completed in 1959, commissioned by then editor-in-chief of the merged Financial News and Financial Times (1945) Brendan Bracken, to Bracken House – clad in pink stone to match the colour of the newspaper.

Why am I telling you all of this? Because over the last two months, ahead of next week’s move, we have had serious sessions of de-cluttering, Marie Kondo-style. Countless numbers of shoes tucked under desks were wiped away in last weekend’s ‘floor sweep’. Better still, hundreds of book were put out to pasture, staff free to pick and choose from the thousands of profferings supplied by publishers – hopefully for review. 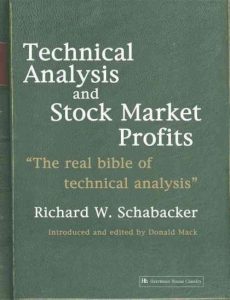 And I landed some gems. The top three picks were: ‘The Definitive Guide to Point and Figure’ by Jeremy du Plessis – which I didn’t have to pay £69.95 for (sorry Jeremy). A new one on me: ‘Mastering Hurst Cycle Analysis’ by Christopher Grafton (more on this shortly). And the 2005 reprint by Harriman House of: ‘Technical Analysis and Stock Market Profits: A Course in Forecasting’ by Richard W. Schabacker’s classic 1932 (second edition 1937) text. First published in the UK by Pearson Professional Ltd in 1997 (ex-FT owner), we’ve come full circle, so to speak.

I read one of the original versions, lent to me by a stockbroking firm when I first started in the City, and rate it up there with Edwards and Magee’s 1948 ‘Technical Analysis of Stock Trends’. My new book has a delightful introduction by Donald Mack who had, I’m told, a fabulous collection of technical analysis books – probably because in the late 1970’s he’d set up the first US bookshop dedicated to the subject in California.

The Editor’s Introduction of the Harriman book states: ‘’it is here that the author for the first time in memory presented Technical Analysis as a totally organised subject wherein he comprehensively laid out the various important patterns, formations, trends, support and resistance areas, and associated technical detail.’’

I’ll be rereading this book. You can pick up the one and only copy the STA has at its Barbican Library – but rush!