Refiinitiv Eikon presented a very interesting webinar last Thursday, with content provided by their European Power team. Despite being a lifelong fan of the Reuters terminal, now in its new incarnation as Refiniitiv Xenith, I wasn’t aware that they were tracking and forecasting weather patterns. Gabrielle Martinelli, manager of European Power, steered the meeting, with content provided by analyst Sebastian Sund and senior meteorologist Georg Mueller.

At the moment they are focusing on Europe and the Nordics, aiming to help the power industry in this part of the world. You might say, I wonder why?

Mainly using data collected by the European Centre for Medium-Range Weather Forecasts, both the centre and Xenith collate and forecast weather patterns from 10 to 46 days ahead. ECMWF’s operational forecasts aim to show how the weather is most likely to evolve. To do this, the Centre produces an ensemble of predictions – where these tend to maintain their correlations. Unfortunately Refinitiv only have four and a half years’ worth of 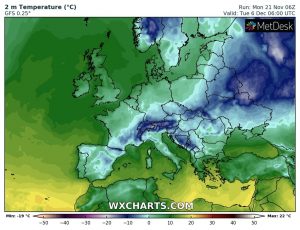 information of the ensemble regression trees on which they are working.

Seasonal forecasts, up to 7 months ahead, use data from the US Global Forecast System. ‘Average’ temperatures are based on data from 1991 to 2020, and also take into account temperature, wind, solar and hydro. Both research/forecasting centres collate data from weather stations, where the higher the density of these the greater the accuracy and, obviously, the better the granularity and the lower the effect of bias.

For this winter in the Northern hemisphere they feel October’s thunderstorms have been extreme and are not expected to last. The Nordics and Eastern Europe should be slightly warmer than usual while the very far East of

Arctic Amplification, where warming is stronger around the Circle, should lead to further demise of sea ice. Sea Surface Temperature in the Pacific Ocean should have little effect in 2023 as El Niño is in a negative phase (more commonly known as La Niña).