Invited by STA Executive Committee member David Watts to give this talk (who’d heard about him through the www.trade2win.com forum for active traders), I introduced myself and apologised for knowing nothing about his subject. Unfazed, William told me he was the founder of Feibel Trading Ltd., a firm specialising in exploiting supply/demand imbalance, trader development and education.

His emphasis on teaching came across clearly in his measured tone, calm demeanour and pace – and his confident use of Mark Tennyson D’Eyncourt’s old-fashioned pointer. He said it might be 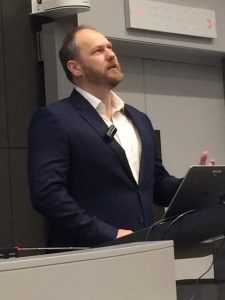 difficult for him to keep to the suggested 45-60 minute talk, ‘’I could talk for hours’’ but ‘’before I begin, I’d like to say a few brief words about technical analysis’’. I prepared for the long haul; fifteen minutes later we were still on the introductory slide.

His first chart was a day’s worth of 5-minute bars of the e-mini S&P 500 with volume and GMT time along the bottom (Ninja Trader is his charting package). A detailed look, bar by bar, began with him saying, ‘’look into this reaction from a macro perspective’’ – on a 5 minute microcosm of time. His focus on volume relative to the height of the price bar was interesting, but I was a little worried when he called the height of the bar ‘’the spread’’, and when asked about FX volume he answered, ‘’volume, even with FX, is relative’’.

In fact, a lot of his talk was peppered with faux-trader speak, words of wisdom and bon mots. Things along the lines of: ‘’most traders are unwilling to work to master their craft’’, ‘’don’t wait, just let the market pull you in’’, ‘’you have to take the trades’’, ‘’the tell’’ and ‘’we’re trading up the sprint’’. I could go on, but you get my drift.

At 19:22 we move on to slide 3, the same e-mini but with the following day’s price action tacked on (I think it might be 26 February but the price scale was 2762 to 2789); no volume. When asked what his exit strategy is, he’s rather vague. On cue, David nudges him saying he’s only got 5 minutes left.
Chatting later one STA member’s reaction was, ‘’you’ve got to be organised in your presentations’’, though Jeff was more enthusiastic pointing out that William ‘’got a lot of discussion going’’. I still don’t really know what Wyckoff’s method is.