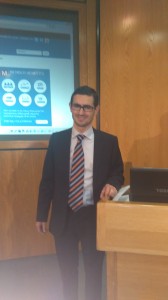 Famous Belgians are as rare as hen’s teeth, so we are being a little facetious here. His excellent, well-timed talk, with clear slides, on a challenging subject, this Namur resident Julien Camberlin (MFTA, CFTe and CEWA Level 1) was ‘worth it’. Do look out for the video which has been posted in the member’s area of the STA website. www.technicalanalysts.com

Titled ‘Market Chaology’, the lecture covered the model he has designed which includes a good dose of Elliott Wave theory, Fibonacci ratios, multiple wave relationships, chaotic systems, and fractals. With this I may have put you off already, but you would be wrong to think so. As I said to an old hand at drinks afterwards, sometimes we must try a little harder.

My key take-away was the sheer beauty of pure, rigorous maths. Not plodding arithmetic, or horrid algebra, but working in a far more abstract and artistic way. He believes that his ‘chaotic’ analysis is a half-way house between random walk and deterministic forecasting.

One of the most interesting concepts was that of ‘strange attractors’. His example: a pendulum. Push it, and it starts moving randomly. But slowly and steadily it circles and eventually comes to a standstill at an equilibrium point, its gravitational centre. He also used the analogy of lightning which falls from the sky aiming at no particular target at the start of the bolt, but as it approaches the earth it will tend towards the tallest object that can conduct its power.

He accepts that his method works best with big markets. So AIM shares and so forth do not have deep enough pools of to cope with his analysis; a bit like small samples when polling opinions. Likewise he finds that with currency pairs, where one is a major and the other a minor currency, the big one tends to dominate. As Bob Dylan said, ‘chaos is a friend of mine’.

Yet again a thought-provoking talk at the STA. Do come to the next meeting on the 12th May where Gerry Celaya of Redtower Research will be speaking.