Why hide your light under a bushel?

CNBC’s ‘Mad Money’ Jim Cramer is certainly not my favourite business TV presenter (too much shouting!) But for once he had something interesting to say, slipped in during quiet markets at year-end. ‘You may not be a technician but you need to know what the charts are saying and you need to know how to read the internals to verify a real move or a phony one’. 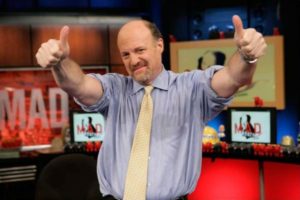 Nice to hear a Harvard graduate and ex-hedge fund manager admit to using anything other than economic fundamentals and balance sheets. Also telling that he, like Goichi Hosoda of Ichimoku cloud chart fame, draws parallels between charts and hunting prey. While talking on the subject I have been heard saying, ‘charting is like tracking an animal; you are looking at footprints to work out where the price has been and is going’. Of charts Mr Cramer says ‘you must consider them as if they are footprints at a scene of a crime. These footprints trace out what big money managers might be doing with their buying and selling of stocks’.

In more Classic Dow Theory vein he agrees that the indices must confirm each other when they break out, and that comparing price action of an individual stock to that of its index is often a worthwhile exercise. As well as the usual stock market indices he uses ones based on ETFs, the SOX semiconductors, banking, and US housing ones.

He’s watching for good participation in a move, monitoring the number of stocks advancing compared to those declining, the ratio between shares setting new highs versus new lows, and the accumulation distribution line. To these he adds volume statistics, likening them to a lie detector, believing that light volume can tell investors whether a move is ‘real’ i.e. worth backing, or not.

He adds Relative Strength Index to his basic tool box because, ‘typically when a stock gets overbought it is ripe for a pullback…[often] after they have gotten too far away from their longer term trend line’. The inverse holds true and a stock might fall so far and is likely to snap back providing a terrific action point. Some stocks can defy gravity and oscillators for weeks, in which case he suggests one should, ‘strap yourself into a real moon shot’.

‘Powerful moves can, and often do, elude those who are only focused on the underlying companies and not the action of the stocks themselves’. If only more analysts would ‘fess up.