FTSE’s 6,000 line has been respected by the market yet again!

On 18th February, on behalf of the Society of Technical Analysts, I presented the inaugural Finance Society lecture at Anglia Ruskin University’s Lord Ashcroft International Business School and showed the following chart.

I argued that before making significant new highs the FTSE 100 would return to the important 6,000 line and it would then give a significant Coppock indicator buy signal, which will be only the eighth Coppock buy signal in the FTSE 100’s 32 year history. (For more information on Coppock refer to (http://en.wikipedia.org/wiki/Coppock_curve). So let’s ask the following questions; 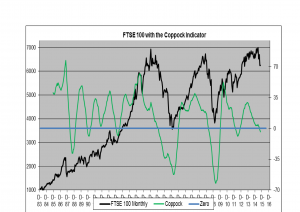 In summary, my analysis has combined Charting, Technical Analysis and Behavioural Finance culminating with my conclusion that the FTSE 100 index will find support at or near the important 6,000 level before rising again to the old highs in 2016. But, please be warned that September and October are notorious for being bearish months – although I have reasons why I believe 6,000 will be a solid support line again all I know for certain is that the excellent monthly Coppock indicator will definitely now give a buy signal at some point in the future, but it is possible that it may be from much lower levels. So, remember your money management discipline and, as I’m sure you always do, keep your stop-losses in place. Good luck.