Never mind the ‘fake news’ on social media. Alarmist headlines, sloppy opinion pieces masquerading as reporting, and targeted advertising mean many – like me – are becoming increasingly cynical. On Tuesday morning, in a print version of a free newspaper that I rate (and its editor knows this because we met recently), I saw the following: US equities have been the best-performing investment in 2019 so far, with UK and global equities close behind, a new list has revealed.

The article continues: Government bonds have been the worst-performing asset class so far, losing four per cent of their value, despite being the best-performing in 2018. Inflation-linked and corporate bonds also gave a negative return according to a list released today by the investment management provider Fidelity International.
Now, why am I unhappy with this story? Why did I stop and question its validity – as I say, it was published in a paper I like and has a large, well-respected investment house as its data source. I know US equity markets have rebounded strongly from the Christmas bloodbath and, as always, the faster they fall the bigger the ping back of the elastic band. I still wasn’t convinced. I thought I knew where to find this year’s star asset class.

I thought it would be in China-facing equity indices, which had had a particularly torrid time starting in January 2018. Sure enough, they’d done well, but was it good enough? The quickest and most reliable way to compare is via what Reuters calls ‘rebasing’ charts. You choose the assets you want to compare, the start and end dates, and price them all at a nominal 100 on day one so that percentage gains and losses are plotted.

Instead: I offer you a few rebasing charts. The first is that of China-related indices, where the best performers this year are the Shenzhen A share and ChiNext Composite, up 30 per cent; at the bottom, Taiwan.
My second chart is that of indices in the Americas, which includes Mexico’s IPC in bottom place and Brazil’s Bovespa up just 2.5 per cent, while Dow Industrials gained 15 per cent. I could go on, but I think you catch my drift. 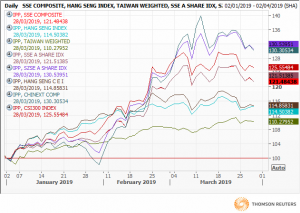 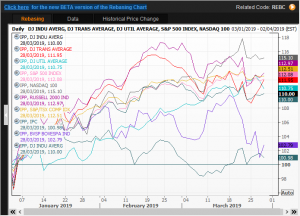