Back to the Bank of England: Black marks all fudges

Recently the Old Lady of Threadneedle Street has been in the news for all the wrong reasons. Now because Ms Charlotte Hogg was economical with the truth, flouting compliance rules she herself had drawn up. Bagging a job that was advertised for only a fortnight (7-21 November 2016) she was an obvious shoe-in, not just because she would tip the gender bias but because ex-Chancellor Osborne, who hand-picked Mark Carney as Governor, used to work for her Dad. 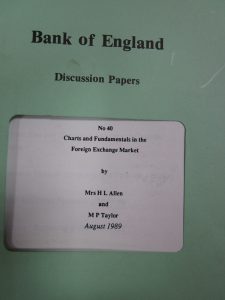 rney General and also Lord Chancellor. They don’t get much more blue-blooded so apparently the great-granddaughter merely made an ‘honest mistake’.

Years ago Britain’s central bank and its Court was not populated only by ‘people like us’, and this was reflected in their thinking. Bankers rather than strict quantative economists were in demand, and so too academics and market specialists. I know because as a technical analyst I used to be invited to make chart presentations to the foreign exchange department. Not surprising really because they were well aware that the FX market had embraced the subject wholeheartedly many years earlier. 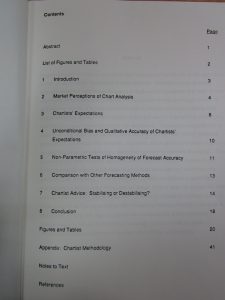 But don’t take my word for it. I attach photographs of a discussion paper seen by the Society of Technical Analysts, carried out by the Bank of England in 1989. More good news: one of the authors is a woman! The topic: Charts and Fundamentals in the Foreign Exchange Market. The table of contents is comprehensive – this is not a brief outline of the subject – and the focus on whether advice is stabilising or not very interesting indeed.

I love their term ‘non-fundamentalist analysis – chartism’ rather like all goods imported into the UK used to be labelled ‘foreign’. It gets better: ‘the majority of chief dealers use at least some chartist input…[where] charts and fundamentals appear to be used largely as complementary, rather than competing methods of analysis’. 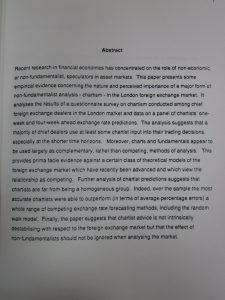 hey conclude: ‘over the sample the most accurate chartists were able to outperform a whole range of competing exchange rate forecasting methods. Finally…the effect of non-fundamentalists should not be ignored when analysing the market’.

Things can go backwards rather than always ‘going forward’.