Isn’t life funny? Last week I wrote about Charles Mackay – he of the Extraordinary Popular Delusions and the Madness of Crowds 1841 book – who said, ‘those who sound the alarm over an approaching railway crisis have somewhat exaggerated the danger’. A week later, here I am quoting Sir John Templeton, ‘it was an amazing day on the 24th October 1929 when Jesse came home and his wife thought they were ruined, and instead he had the second best trading day of anyone in history’, making at least $100 million.

Dreamt up by STA Vice Chairman Charles Newsome, March’s monthly meeting was a real treat for habitués and newcomers alike. The ‘fireside chat’ with author and publisher Tom Rubython was a surprise and a delight. Perhaps because the format was novel, and the speaker controversial, Charles felt the need to drag along his colleague at Investec Wealth & Investment, Jacqueline, for moral support – and to help sort the boxes of books on offer. 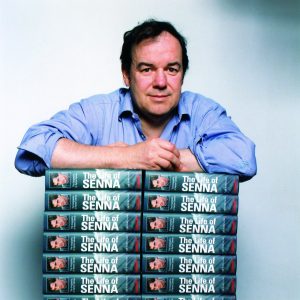 Tom, our British speaker, is a man who’s turned plenty a trick in his time, starting as a market trader straight from school – and no, not financial markets but street markets. From there he quickly turned to publishing magazines, trade ones mainly though with a handful of business and general news ones thrown in for good measure. He explained how, over the years, he’d come to be on first name terms with the judges in Court 13 – where libel cases are heard. ‘People seem to accept what’s written in books as the truth, verbatim, whereas magazines get writs’.

Eventually he chose to write biographies – of dead people. His book, Jesse Livermore – Boy Plunger, took many years to write, with help from Davis Peett, not just because of painstaking research at newspaper cuttings libraries, but because the original book only recently came out of the 70 year UK copyright.

He has been fascinated with the man, his psychology, the mind-set of a trader, and the use of margin, for a long time. He believes that Jesse has character flaws, might have been bipolar, and to a certain extent autistic, possibly caused by his dirt farmer background and mistreatment by his Dad – yet he was a brilliant mathematician and a serious womaniser.

I’ll leave you to read all the juicy details in the book, published by www.themyrtlepress.com

And with a quote from Victor Niederhoffer, ‘Livermore went bankrupt for at least the fourth time in 1934. [He] was back where he started at 16. He did not seem to learn from his mistakes’. 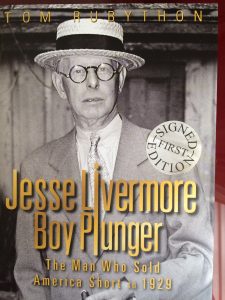