The STA poker night is usually the stuff of legends, Tom Hicks MSTA, board member and organiser had much to live up to after the last event near Cannon Street. The stage on this occasion was Devonshire Square in the heart of the city and the players arrived with hopes and expectations of winning tournament and the 1st prize, which was a bottle of champagne (probably more the champagne).

After the pleasantries and a brief introduction the excellent poker dealers gave the less familiar members a quick introduction to the game ‘Texas Hold’em’ and as much as it was about odds, 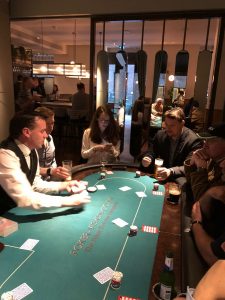 attributes like money management and bluffing proved to be just as important as poker skill! Once the cards had been dealt you could feel the tension building amongst the players which included the best and brightest the STA had to offer. It was the perfect mix of the old guard (who probably did their technical analysis on graph paper) and the young, one of which actually worked at an online gaming company.

Soon enough we down to the final 3 which included Leona Gomez, Alistair Phillip and class of 2018 student Andrew Black. Andrew is a methodical gentleman carefully risk managing, solving complex odds calculations in a fraction of a second. Leona was the joker in the pack, with her partner in crime Clive Lambert, they had carefully formulated tactics to disrupt the thought process of the other players with peer pressure and tactful mind games. Alistair was obviously a 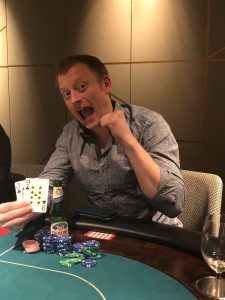 student of the game, a keen martial artist he seemed to use all his composure and emotional balance to great effect during the game.

In a epic final battle, unfortunately there could only be one winner and on this occasion it was the youthful Alistair Phillip that took the crown. Proudly displaying the trophy and 1st prize with his winning hand (which was a complete fluke) Jack and 9 suited. Andrew came a close second and Leona pocketed third place with a valiant display, but the night belonged to Alistair.

The STA social functions are an important part of the Society as it helps members get to know one another and speak outside the realm of technical analysis. It’s a chance for new members to get to know senior more established technical analysts and even of you don’t know how to play poker (Clive Lambert), it was a good laugh.