Ironically members of all three societies met in the auditorium at One Moorgate Place on the hottest day so far in London. This, as the expert panel reminded us, was against a background of a freeze in the crypto market. Hosted by the Society of Technical Analysts, its chairman Eddie Tofpik described the line-up as something from Harry Potter. Not being a fan of Ms Rowling’s books, I was none the wiser. It turns it’s something to do with there being three speakers, like the three arrows in the novels (not Singapore’s Three Arrows Capital), where the moderator, Sam Horowitz of CMC Markets was to act as Dumbledore, the headmaster. And would you believe it, Nick Philpott of Zodia Markets by Standard Chartered did look like the hero of the books.

Geoff Kendrick was first up with a neat, well-timed presentation. Currently Head of Crypto Research and Emerging Market Foreign Exchange at Standard Chartered Bank. As most of us in the room would agree, he pointed out that over the last six months most assets have gone down in value. I can’t go into more detail because the whole evening was under Chatham House rules where no comments can be attributed to any individual. 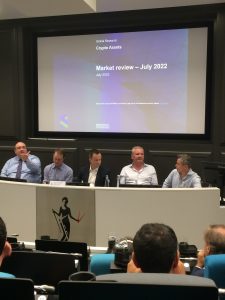 Next was Charlie Morris of ByteTree Asset Management, a regular at STA events. He’s launched a new fund called Bold which is a weighted mix investing in Bitcoin and gold, a sort of risk on (crypto) and risk off (precious metals) uncorrelated mix. He too agrees that so far this has been ‘’a strange old year as we are coming out of the everything bubble.’’

Nick Philpott sounds positive on the new venture he’s working on which will be based in Ireland and will concentrate on a crypto exchange and custody as this is key in this emerging asset class. A general discussion around potential new trends ensued, with some very pertinent and insightful questions from the audience.

A quick thank you to all involved from Oliver Madden, President of ACI UK, who noted the value and enjoyment these joint meetings provided. I, too, would agree that the event on Tuesday 12th July 2022 was a success.