This month’s speaker, Riccardo Ronco of institutional equity brokerage Aviate Global, dashed in on a cold London evening looking just as dapper as you’d expect of an Italian.  Claiming his compatriots were no good at cracking jokes to break the ice, he cracked on with his very interesting and useful presentation.  A video will be posted on the members’ section of www.technicalanalysts.com shortly.

His approach to stock market investing is simple and very well 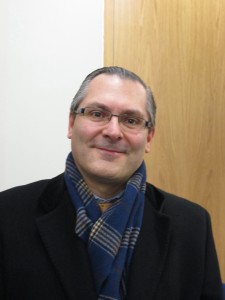 researched.  Realising that if one inverted the rules for stochastics, buying when they are high and selling at the lows, profits increased as one was able to follow predominant trends, the following of which was pioneered by David Ricardo (as in the 1838 book ‘The Great Metropolis’ by Grant), source of the oft repeated mantra: the trend is your friend.

The key is obviously to decide whether the market is moving clearly in one direction or another, and when it is in a congestion phase.  One ‘needs to know which kind of context you are operating in’.  Monitoring momentum helps tremendously here and he lays out several ways to decide what is leading, separating out the laggards.  With examples of energy and financial sector performance relative to their indices, he reminds that a contrarian approach kicks in when prices and fundamentals are too ‘out of whack’.  He recommends ‘The Janus Factor: Trend Follower’s Guide to Market Dialectics’ by Gary E Anderson (2012).

Using monthly charts, with prices going back three, six, nine or twelve months (but certainly no more than 15 which becomes a buy & hold system), he picks out quartiles, thirds, and deciles of shares and ranks their performance.  Moving averages on these determine trends and, being ‘humble’, he believes that optimisation of them is a pointless exercise.  He favours an ‘agnostic’ approach where, using four different moving averages, when all are suggesting a long position one invests 100 per cent of total cash.  If only two are bullish, then only half one’s money is used, the remainder held not in cash but long of US 10 year Treasuries.  Such a neat idea!

Networking after the presentation Trevor Neal ‘kindly’ presented Riccardo with a book: ‘Trend Trading for Dummies’! 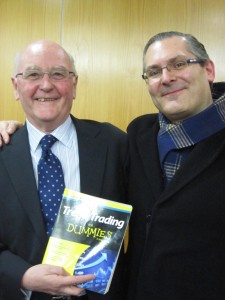